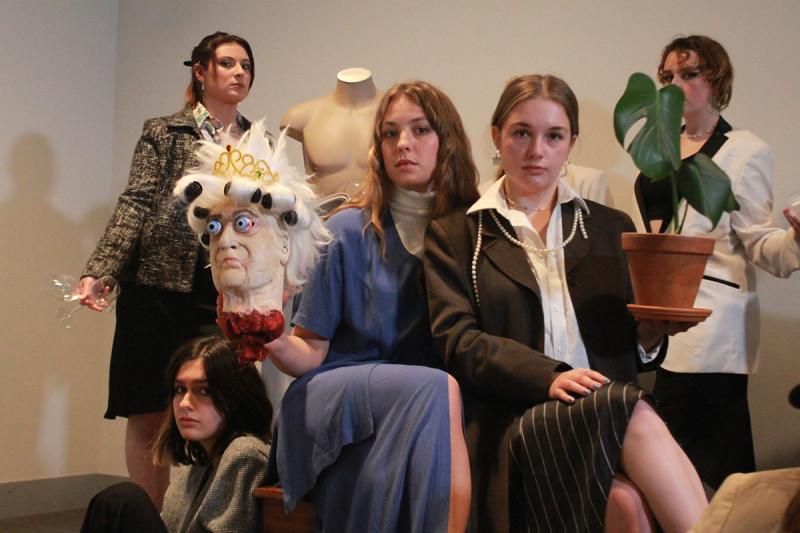 Long Cloud Youth Theatre has been developing the next generation of Wellington performance talent for more than 15 years by devising exciting, innovative, and experimental works that push the boundaries of traditional theatre. Follow The Money is their latest offering and is a modern meditation on capitalism seen from the unique perspective of Generation Z.

19 young performers dressed in muted corporate attire deliver a series of avant-garde theatre-dance-comedy vignettes broadly on the theme of how money affects the world around us. They range from aggressively mysterious NFT sales pitches, how the world hates the super-rich and digs at the facile attitude of the National Party, to the seductiveness of coupons and discounts at your favourite retail outlets, the need for students to work part-time while studying, and the stress of the endless emails and notifications that pop up on our cell phones reminding us of unpaid bills, lapsed subscriptions, and declined EFTPOS transactions.

The performance starts with a gentle sequence of soft music augmented by wet fingers being rubbed round the rims of glasses in a dark space lit only by the torches on cell phones. The performers then move to the white walls behind the audience to project dancing watery shadows with the same glasses and lights. It’s beautiful and highly effective, but it’s not entirely clear what this has to do with the theme of capitalism. I took from it that perhaps it was reflective of a more innocent time before human lives were ruled by the endless pursuit of the dollar.

Once the lights suddenly flash on, the piece starts in earnest and the next 45 minutes or so are bursting with energy, creativity, and satire on the capitalist zeitgeist. These bright young minds have produced a work that is highly original, often funny, and riffs on a theme we can all relate to. Thanks to Long Cloud Youth Theatre, I’ll never look at an electric car in the same way again.