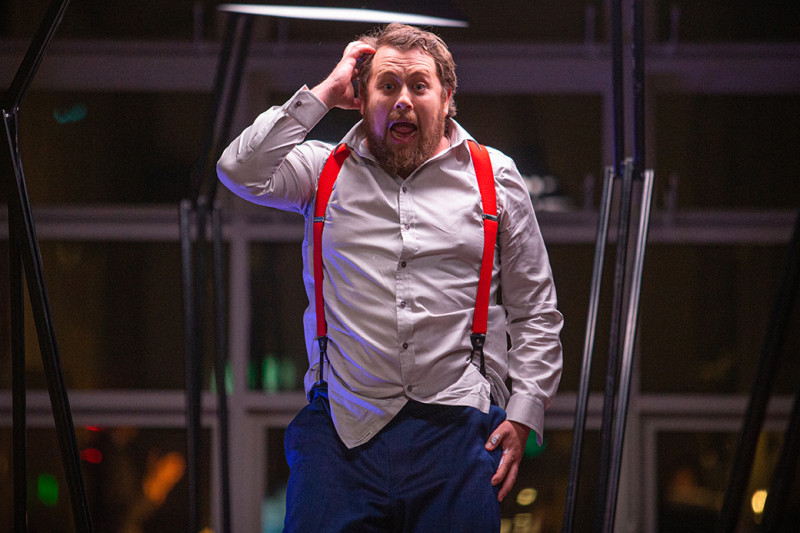 Eight Songs for a Mad King

This New Zealand Opera production of Eight Songs for a Mad King takes a big swing. Our audience experienced the short monodrama twice – once from the outside looking in, listening through headphones, and again indoors, in the midst of the action. The text is inherently engaging, amplified by Robert Tucker’s total commitment to his role as the titular King, but the experimental staging failed to add impact beyond its intriguing premise.

In Eight Songs for a Mad King, we watch and hear a powerful man break down – a King losing his sanity in the throes of modern-day greed. He climbs, convulses, and dances around a boardroom yelping discordant melodies that leap over five octaves.

This is a challenging show for all in attendance, from its solo star and the musicians who accompany him to the audience. Its libretto, written by Randolph Stow, is derived from the words of George III, paired with music that the British king attempted to train bullfinches to sing. With this in mind, the show works wonderfully as a voyeuristic experience. It is far from what one might consider a traditional opera – it’s a story told through ever-building tension, a character study without a clear narrative.

The musicians deserve as much praise as Tucker for their commitment to the piece. Led by conductor Hamish McKeich, the ensemble is required to act as well as perform a difficult score. The interactions between them and the King successfully distance us further from reality.

Sitting outside, observing what I could of the show through a window was interesting but not engaging. While the staging was a brave attempt to juxtapose our response to madness from a distance versus up close, I felt I was missing out on compelling visual elements and simply struggling to see. When it came time to watch from inside, I appreciated the text and the work of those involved much more, but it made the first viewing somewhat redundant.