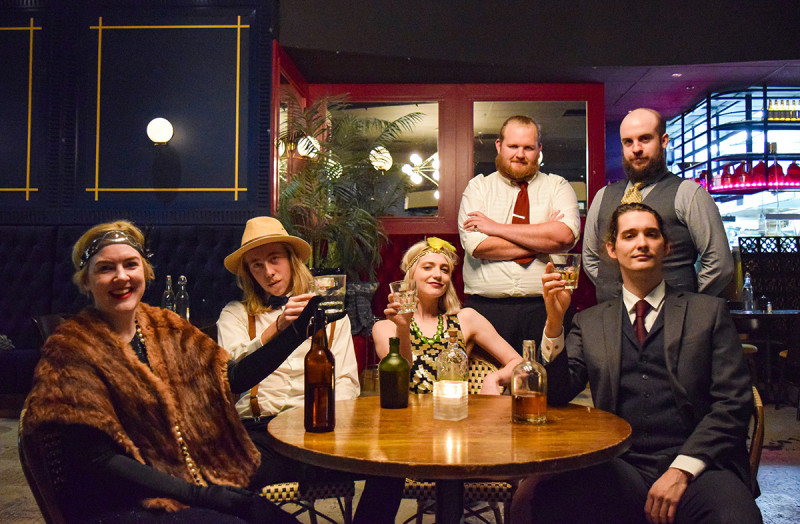 I dare you to say “1920s-themed murder mystery and cocktail night” and not get excited. Go on. That’s right, it’s impossible because it’s the coolest premise ever. Dillinger’s Who Dunnit? lives up to the hype.

From the minute I walk through Dillinger’s doors I’m immersed in the world of the speakeasy. A wonderful band plays while actor Calvin Standrill (playing Vincent Monoghue) greets me in a stellar American accent and gestures towards a free drink, my favourite kind. In this case, it’s a French 75 and it’s delicious. Costume designer Jessea St-Louis has done an exquisite job of decking the actors out in 20s garb, with audiences rising to the challenge too. Some are so well dressed I can’t tell them apart from the cast, which shows the level of enthusiasm at play here.

It's prohibition time, but thankfully, we’re treated to drinks that are totally not alcoholic or illegal. There’s rosemary not-gin, cinnamon barely-bourbon, and I-can’t-believe-it’s-not-absinthe, which we sample from Clara Cameron (played by Susannah Donovan), Jack Boggins (Tyler Clarke), and feminist icon Daphne Montgomery (Rebecca Wilson). Each character pours out their tipples and their hearts as sinister secrets start to emerge.

When mob boss Babyface Morraine (Blake Willis, who delivers minimum dialogue with maximum impact) dies under suspicious circumstances, it’s up to the audience to figure out whodunnit and why. We’re presented with clues while we snack on sliders and more nibbles in what turns out to be the tastiest treasure hunt ever. Audiences pry actors for more details and more tips, with some tables discovering titbits others don’t. Then, detective Lisa Mason (Ana Clarke) has us put it all together in an interrogation where we must uncover the murderer.

Every detail of this experience has been meticulously thought out, with total commitment from all parties on all sides. There’s even a special cocktail menu that utilises the ‘teas’ we’ve been sampling. Audiences are free to mingle or partake, but we all give it 100 percent in what turns out to be a dazzling evening filled with great food, drink, theatre, and laughter. Hear, hear!