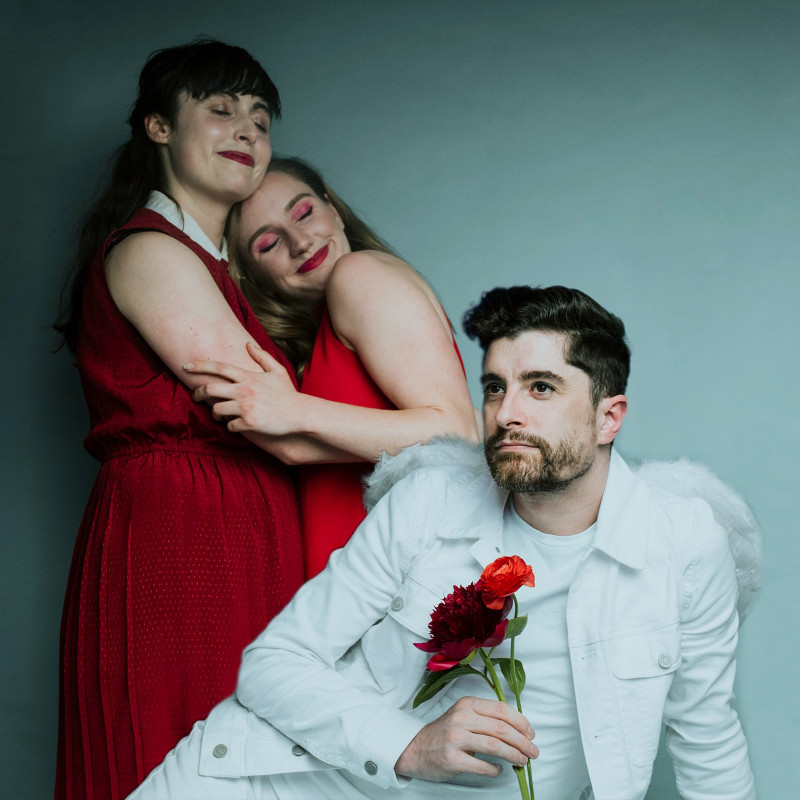 The evening begins with a winged Cupid (Powell) asking who in the audience is looking for love. It’s a heavy opening, perhaps one we’re not ready for, and no one responds. Not to be deterred, Powell asks who amongst us has found love. Newly married, I’m unable to restrain myself and put my hand up. Now, the entire character of Nikki (Dick) is based on how I’ve described Dean: “warm, kind, and secretly weird.”

Nikki’s love interest Jojo (Hogg) is based on another audience member’s attribute of indecisiveness. It makes for a wonderful ride, with Nikki embarrassed to admit she paints dinosaur collectables and Jojo unable to choose between five jobs. While the two actors ham up these qualities at the start (which isn’t a bad thing as it gets the crowd giggling), they gradually lean into more nuance as their characters evolve and storylines develop. By the end of the hour, we’re wholeheartedly rooting for them – both as individuals and as a couple.

This is largely thanks to the brilliant comedic timing of the actors, who hold onto an astounding amount of information and consistently bring the audience in on the joke. Their conversation is realistic and genuine, especially when it’s allowed to flounder past a scene’s natural end (as in the travellator in an aquarium awkward silence that leads to a squee-worthy kiss). It truly feels like we’re witnessing new love take its first steps. As our quick-witted, charismatic ringmaster, Powell sets the scene while Charlotte Glucina on keyboard helps to build it to a climax.

My friend looked at me after Cupid’s Guide to Modern Romance and said, “I needed that”. I think that’s a beautiful way to sum up this achingly sweet, funny-as-heck queer love story.