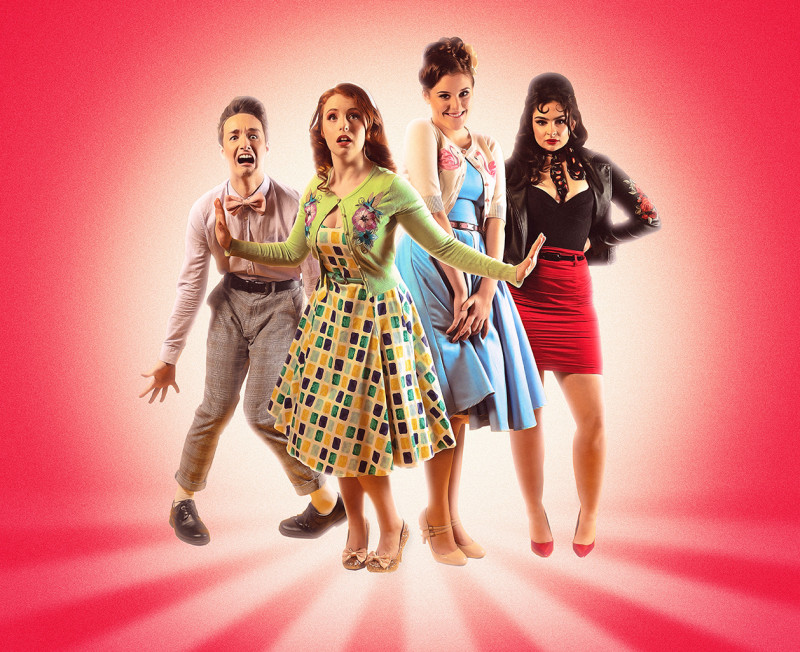 Based on John Waters’ cult classic film starring Johnny Depp (which I haven’t seen, but intend to immediately), Cry-Baby – The Musical is set in Baltimore in the 1950s. It follows Allison Vernon-Williams (Flora Dryburgh), a teenage member of the super conservative, Squeaky Clean clique The Squares. Much to the delight of Allison’s grandmother Mrs Vernon-Williams (Malea Nicholson), Allison and Baldwin (Devon Neiman), the frontman of The Squares, are like, totally an item. That is, until Cry-Baby (Matt Mulholland) enters the scene. Cry-Baby is the ringleader of The Drapes, a group of rebel misfits who talk a big game but really just want to be loved like everyone else.

The plotline echoes West Side Story, but it’s not a particularly violent story – er, except for the part about Cry-Baby’s parents being executed because somebody Did Something Wrong, Once. I won’t spoil who that somebody was here but a direct note to the actor: your performance of that song was a show highlight.

In saying that, there are so many highlights, this production became its own highlight – of my week, month, even perhaps my year. Te Auaha’s musical theatre students just keep getting better and better. Standout moments include an extremely entertaining tantrum from Neiman; a mic-drop stare from Jake Elston, who was brilliant in every role he played; killer dance moves from the gifted Fipe Foai; a marvellously maniacal karaoke performance from Lane Corby; and grin-inducing boot licking from Bentley Stevenson. Special mention must be given to Dryburgh for a knockout performance – she’s really come into her own since The Addams Family – and to Jade Thomson, Caitlin Penrose, and Moana Leota for their exquisite ensemble work and harmonies.

Cry-Baby – The Musical is the epitome of a stage spectacular. It’s a dizzying explosion of colour, movement (phenomenal choreography by Leigh Evans), and sound, with musical director Kate Marshall producing exceptional powerhouse vocals from a cast filled to the brim with talent.