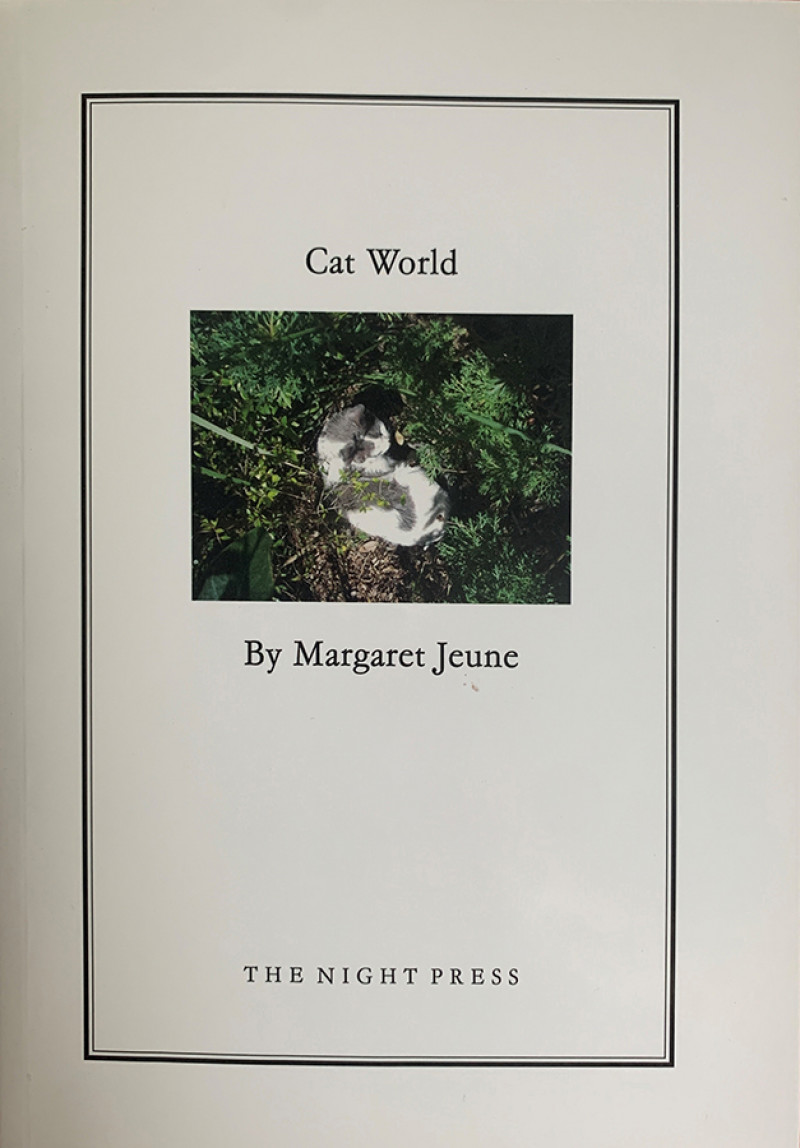 Cat World is an ode, a love letter to the companions that enter and accompany our lives briefly but with such joy and love. There are few that cannot relate to the poems in Margaret Jeune’s collection detailing the lives of cats alongside our own.

The free-form poems, 14 in total, are all told from Jeune’s perspective. They are simple and concise. Their simplicity however is what makes them so tender. Jeune often talks to a particular cat, recounting both the antics of the little beast (such as dropping presents in the form of dead animals on the doorstep in Murderous Hobby and Gifts), or describing her cat acquaintance’s various moods and humorous attitudes as in Storm Clouds Brewing and Sheba.

Though cats are the subject of Jeune’s poems, she also critiques people’s consumeristic attitudes towards a living creature as well as their lack of compassion. In for Gus, Gus is treated more like an object than an animal: “Consoling a rejected cat / returned after eight months in a new home / because he wasn’t smoochy enough… Here Gus is back on the shelf… Is there an owner out there / who won’t count smooches?” Similarly in Skid Row at the SPCA, Jeune depicts the cats as inmates or orphans and muses at the best characteristics to have to escape the SPCA. “Be a kitten”, she says, or “if you are a black cat / for heaven’s sake / try for a white paw or nose”. Finally, Juene adds that since “prospective owners are very particular / they come along with exact / specifications in mind”, the best way to escape Skid Row is to “ooze on the charm”. Jeune simply yet powerfully comments on humans’ often inhumane behavior.

Charming and heartwarming, Jeune pays tribute to the furry friends that have brought her comfort and company. Cat World is a wonderful read for anyone who has ever shared a part of their life with a cat.