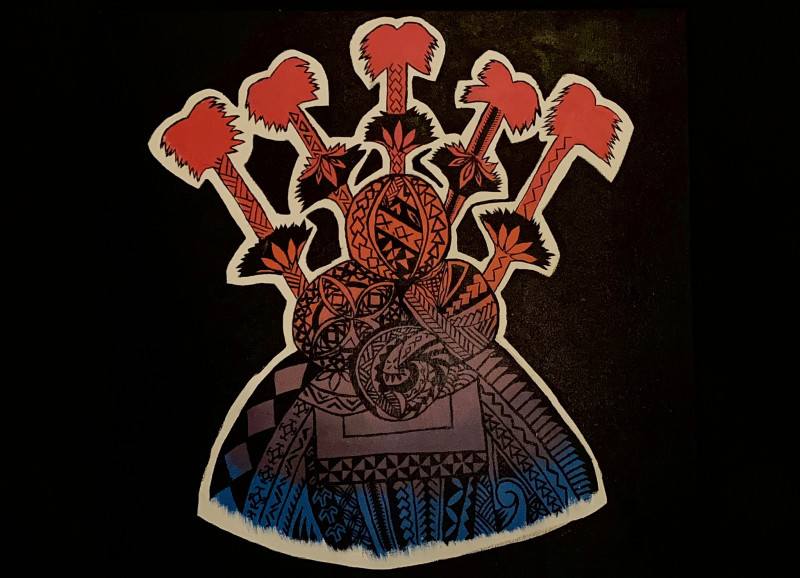 Brown Crown follows the journey of a young Sāmoan woman, Masina (Falesafune Fa’afia-Maualaivao), as she navigates a contemporary world surrounded by never-ending expectations and legacies to uphold. As Masina finds her place in the world, her story is shown in conjunction with the old legend of Nafanua told to her by her grandmother.

From the moment I enter the space I’m overwhelmed by the calm and intimate atmosphere created. The room is dimly lit, with the main source of light coming from the display of large, hanging photo frames in the centre of the stage, filled with images cast from a projector (set design by Sarai Perenise-Ropeti). Masina’s story is told primarily from her family living room, set in front of the frames which are filled beautifully with family photos. When we travel in time and into the legend of Nafanua, a strong and empowering woman and warrior, the action takes place behind the frames, with dim red light cast on the figures. The use of set and lighting (Matilde Furholm) to guide us through time and location is unique, dynamic, and absolutely exquisite. Including beautifully choreographed fight scenes (depicted through dance), each aspect of the piece plays a key role in the production, and each works to complement the rest.

With the exception of the lead role, Masina, each actor takes on several characters. Actors Fa’afia-Maualaivao, Kasi Valu, John Ulu Va'a, and Ahry Purcell work wonderfully together; I’m amazed at how well they all convey the unique personalities and stories of each of their characters.

Complete with intimate storytelling, modern comedy, and both traditional and contemporary dance, Brown Crown observes the exploration of culture and identity. The story reflects on the weight Pasifika women carry on their shoulders, but is one that resonates with everyone; there’s not a soul in the audience who doesn’t empathise with Masina throughout her journey.

Beautifully written and directed, this story has me covered in goosebumps, on the verge of tears, and hysterical with laughter. What an incredible opening night.