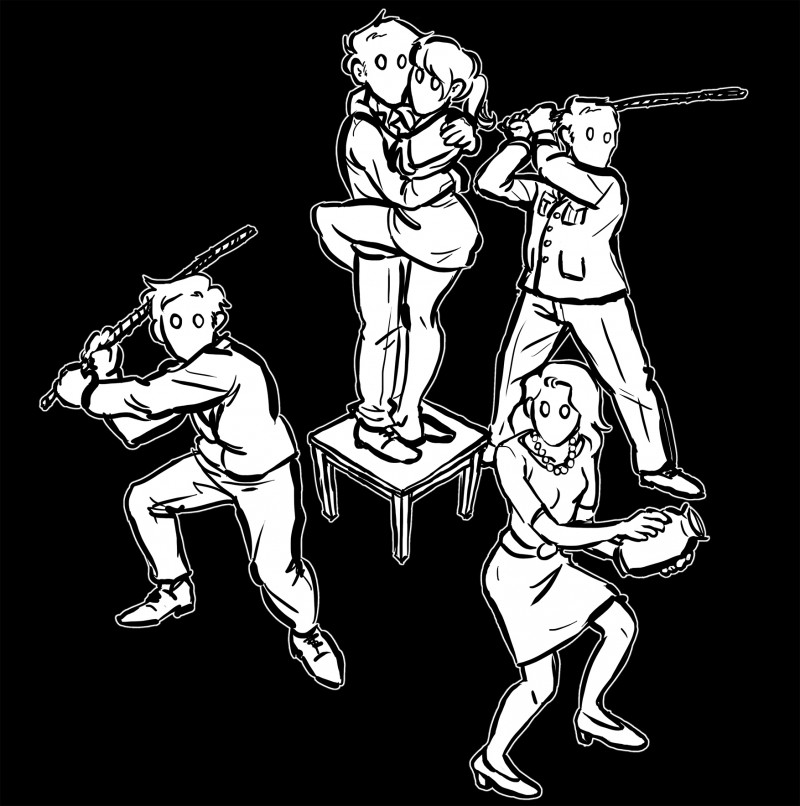 Brindsley Miller (Lee Dowsett) is a struggling artist hoping to catch a break. It’s a big night for the sculptor and his new fiancé Carol Melkett (Susannah Donovan). Millionaire aesthete Bamberger (Marty Pilott) is set to stop by to view Brindsley’s work, plus, Carol’s father Colonel Melkett (Antony Jones) is coming over to meet his future son-in-law. Lacking funds and sense, Brindsley breaks into his neighbour’s house to ‘borrow’ the furniture for a night. But of course, the antique-mad Harold Gorringe (Bryce Jennings) comes back from his holiday one night early. Never fear! A power cut means no one can see anything anyway. Lucky for some, but definitely not for the art collector, who is mostly deaf.

This one-act farce features a reverse lighting scheme. When the power cuts, the stage lights go on, meaning the characters are in darkness but the actors are not. Angela Wei’s lighting design confuses me at first with a couple of slow cues, and dimmed lights to indicate partial light, but I soon cotton on to the conventions utilised. I crave a snappy blackout at the end as opposed to a soft fade.

This production of Black Comedy impresses me for its considered, striking set (Neil Haydon) and the calibre of its cast. Dowsett somehow brings likeability to an insufferable character. Donovan mines the comedic gold of buffoonery to great effect. Every line (or wild gesture) from Jones is a show highlight, while Tod’s drunken whooping and Jennings’ indignant hooting plant a wide grin on my face.

Each cast member takes up the reverse lighting challenge with glee. Not once do I see anyone make eye contact or look directly where they’re going. It makes for a delightful display of delirious silliness, a phrase I feel perfectly sums up this Wellington Repertory Theatre production.