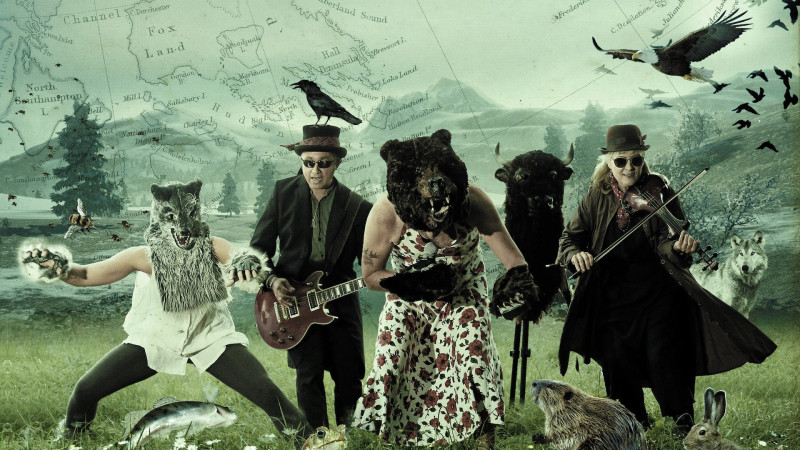 Bear North follows a band of three merry travellers and one wolf. One of the strangest shows I’ve ever seen (winning out over Bald Man Sings Rihanna, which you’d think would be stranger), it’s a feel-good blend of song, storytelling, and interpretive dance that to me represents the essence of the NZ Fringe Festival.

Roy Hutchins is the leader of the pack. He wears a dress, bear gloves, and a large bear head. Playing a keytar and driving the conversation with the audience, he has a gentle, warm nature and is instantly likeable. The thing that I most appreciate about Hutchins is that he asks for consent before putting anyone on the spot and never forces audience interaction. When Hutchins performs, he looks surprised to find himself onstage, which is more endearing than anything else.

Sue Bradley wears a butterfly half-mask, plays an electric violin, uses a stomp box of sorts to create rhythm, and provides backing vocals. She shines on the electric violin, adding a gorgeous folk element to the music that sets the tone for the evening.

Stuart Drake on electric guitar wears a high top hat and whistles real nice. He has a sparkling smile and a serene energy, acting as an anchor to the rest of the group.

And then we have Wolfie. What on earth can I say about Wolfie? During what is a mostly ordinary (but still special) concert, Jake Brown does interpretive dance in a wolf mask. The whole time. A scene where Brown dances with an audience member is lovely, otherwise his spirited performance is just bizarre, but excellent.

The music disintegrates at times into a bit of a shambles, but it all adds to the charm of Bear North. I’d hazard a guess to say it’s a partly improvised work, so a bit of chaos can be forgiven. Though I’d love to see a touch more rehearsal, I wouldn’t change a word (or note) of this strangely touching show.