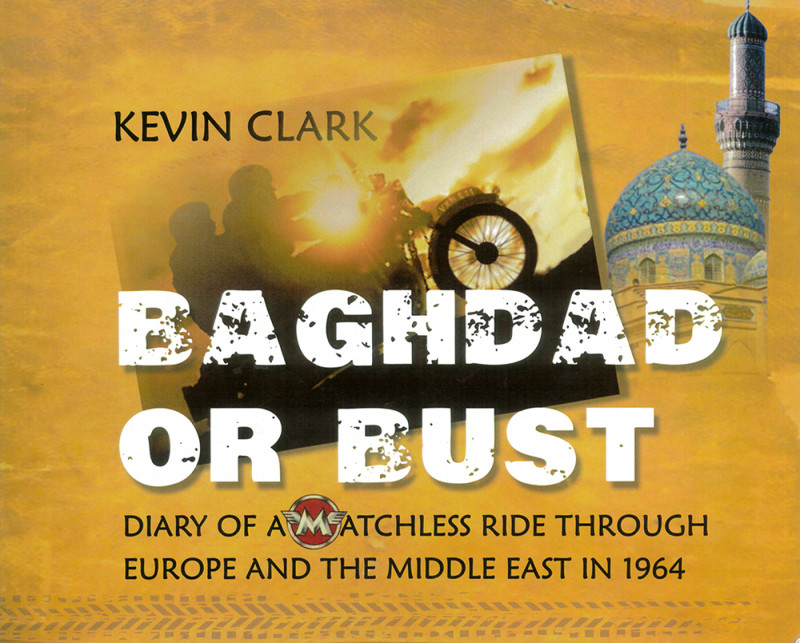 Disclaimer: I’ve known Kevin Clark for about 40 years. I’ve served him in my record stores, been to his concerts, reviewed his albums, and I thought I knew pretty much everything about him. But, this book about his travels to Baghdad floored me.

So, in the words of the rock band Steppenwolf, “Get your motor runnin’ / Head out on the highway”, except imagine it’s 1964 and Clark is on a 1958 British motorbike with a sidecar storage box and fellow traveller Jurgen Erni. The aim, to leave South Africa where Clark was born and take an informal OE soaking up the architectural sites, as both men had just obtained their architectural degrees.

There is a sense of naive chutzpah that I loved. The thought of “Oh, let’s get up and go” will appeal to many. This is a boy’s own adventure venture and I won’t tell you what happened to the bike.

Once one gets over the tedious border crossings with the fractious passport checks, it’s gratifying that Clark recognises the generosity of the people along the way, many of whom offer free meals, accommodation, and help with the numerous problems with the bike. Clark juxtaposes the memories of 1964 with what has gone on over the years, countries that are even more out of bounds today with war, religion (more than once Clark asks the question of religion and the tyrants who enforce the rules), animosity, distrust, and the wanton destruction of architectural sites. To the intrepid traveller’s dismay, many of the sites are now just rubble. Yet even abandoned cities have their charms.

Among a wealth of data are some beautiful descriptions of places such as a gate in a Byzantine wall in Istanbul, the magnificent Hagia Sophia, the Al-Hamidiyah Souq market in Damascus, and Beehive houses in Northern Syria, a simple structure making a comeback to house displaced persons. In between, it’s camel rides, a belly dancing joint, kebabs, and sleeping in ditches.

The book is the perfect size to thumb through with great visuals, maps, and running commentary for all armchair travellers. An early Christmas present, perhaps?