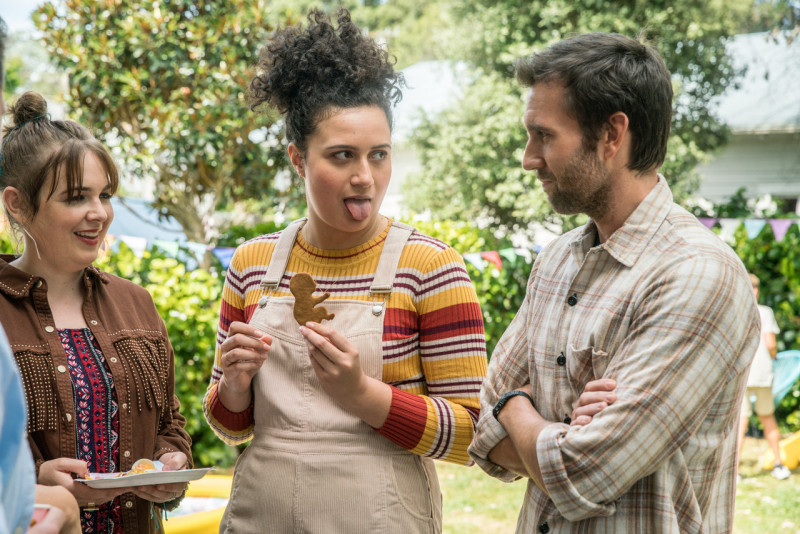 When arborist and wannabe tree climbing champ Zoe (Rose Matafeo) falls pregnant with her long-term partner Tim (Matthew Lewis), she fears becoming a boring mum. While Tim adjusts and looks forward to becoming a father, Zoe seeks to realise her dreams while denying the inevitable.

The combination of Curtis Vowell’s direction and Sophie Henderson’s script leaves no room for Baby Done to run stale. Within a tight-packed 90 minutes, we visit gorgeous parts of New Zealand and meet eccentric characters. Whether they appear for multiple scenes or 30 seconds, each one makes an impact, particularly Zoe’s parents played by Loren Taylor and Fasitua Amosa, her wild friend Molly played by Emily Barclay, and Preggophile Tim played by Nic Sampson… you heard me, Preggophile Tim.

The smartest decision the director-writer duo makes is to give Matafeo and Lewis breathing room. The actors share incredible chemistry and both land jokes, but the film’s greatest asset is that they feel like real people dealing with real problems. We see through Zoe’s attempts to deny motherhood and understand her anxieties. We sympathise with Tim when Zoe’s actions force him to question their future. Ultimately, their arc is emotional and resonant, and Matafeo proves she has dramatic prowess on top of her well-established comedic chops.

I wish Baby Done had taken more risks with its story and humour. While there’s never a dull moment, it pretty much goes where you expect it to and often plays it safe. For this reason, the film is fun but light. Leaning into the more peculiar aspects of the plot may have excelled it further. But when all is said and done, Baby Done has laughs, tears, and personality, and I doubt many will leave the cinema feeling as though they wasted their time.