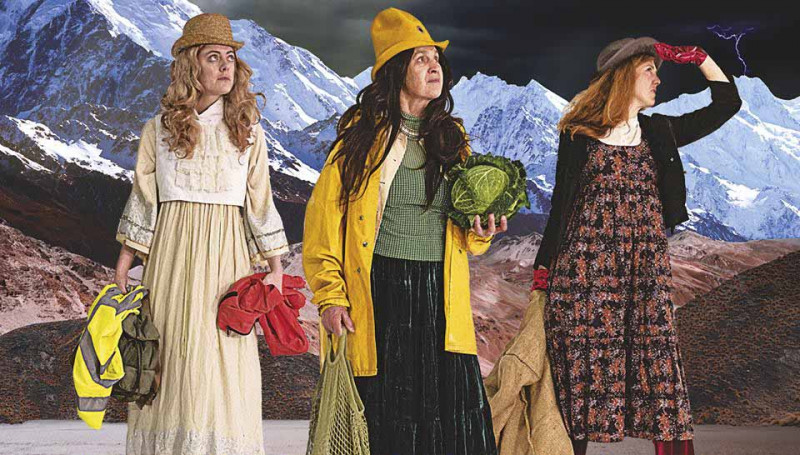 Actual Fact begins when three women witness a series of simultaneous, bizarre events. K (Karin McCracken), M (Madeline McNamara), and F (Freya Finch) are happily exchanging jokes when a fan turns on out of its own accord, a tarpaulin lights up, and two green buckets fall over. A satsuma and a cabbage are also involved, but I won’t spoil anything here.

For the rest of the show, the characters attempt to piece together the inciting incident. Each time they recount the events, they change the details of the narrative ever so slightly. It’s something we all do, but don’t care to admit. By the end of Actual Fact, even the audience is not entirely sure what happened, and nobody knows what it all means – but we’ve had fun trying to work it out alongside the exceptional cast.

Technical design elements are a focal point and highlight of this production. With cyclical videography by Charley Draper, Meg Rollandi, and Isobel MacKinnon; bass-heavy, distortive sound design by Thomas Lambert; and hypnotic, hazy lighting by Owen McCarthy (a design team at the top of their game, overseen by technical manager Michael Trigg), plus rhythmic and repetitive dialogue, I regularly found myself sinking into a trance. Rather than fight that temptation, I’d encourage the viewer to embrace it. In a dream-like state, I was able to insert my own memories and meanings into the script. This meant Actual Fact took me on an entirely subjective journey of my own experiences, and resonated more deeply as a result. I found myself exploring how I might have subverted my history, which I suspect is one of Rollandi and MacKinnon’s ambitions for the work.

Add to this stellar performances from a balanced, adroit cast, and you’ve got a winner. It’s a show you have to be in the right mood for, but if you’re willing to embrace Actual Fact, you’ll have a great ride during and an abundance of food for thought afterwards.