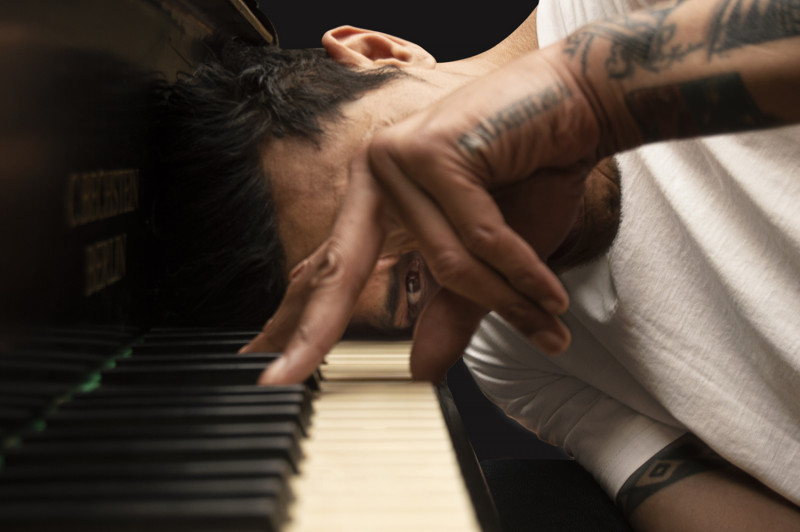 I’ve been staring at a blank screen most of the day and still can’t find words that would do A Boy Called Piano justice. How do you write a review when you’re speechless?

This Conch production follows three boys, Piano (Matthias Luafutu), Wheels (Rob Ringiao-Lloyd), and Piwi (Aaron McGregor), who are made wards of state and sent to Ōwairaka Boys’ Home in Auckland 1963. As director Nina Nawalowalo says, “this is the first time the experience of those in state care has come directly to the New Zealand stage told by a man who lived it” – Fa’amoana John Luafutu, whom she calls both a master storyteller and a survivor. I couldn’t agree more.

The Conch’s award-winning documentary feature A Boy Called Piano – The Story of Fa’amoana John Luafutu is woven throughout the show. Aural excerpts are intermingled with Mark Vanilau’s exceptional live piano playing, while shots from the film are projected onto three white fabric panels to great effect. Many of the scenes – especially conversational ones that lean towards realism – take place in front of the panels, while dream or symbolic sequences often unfold behind them. Hāmi Hawkins’ lighting design works in breathtaking synergy with both the performers and projections, particularly when creating dream states, flashbacks, and speckled light that filters down through the recurring theme of water.

The performers go where I’ve not seen many go. Luafutu deftly shifts between adult and child, bringing a gut-wrenching vulnerability to the latter. Ringiao-Lloyd is our vital comic relief and does it brilliantly, translating humour into a coping mechanism for his character, and McGregor gives his all to express unspeakable trauma.

In A Boy Called Piano what’s left unlit, unsaid, unsung still bruises. The volcano erupts and the lava is cooled by humour and restraint before bubbling to the surface again. Nawalowalo sculpts it all together with a featherlight touch or strong hands when needed, only adding to the power, the force, of this landmark work.