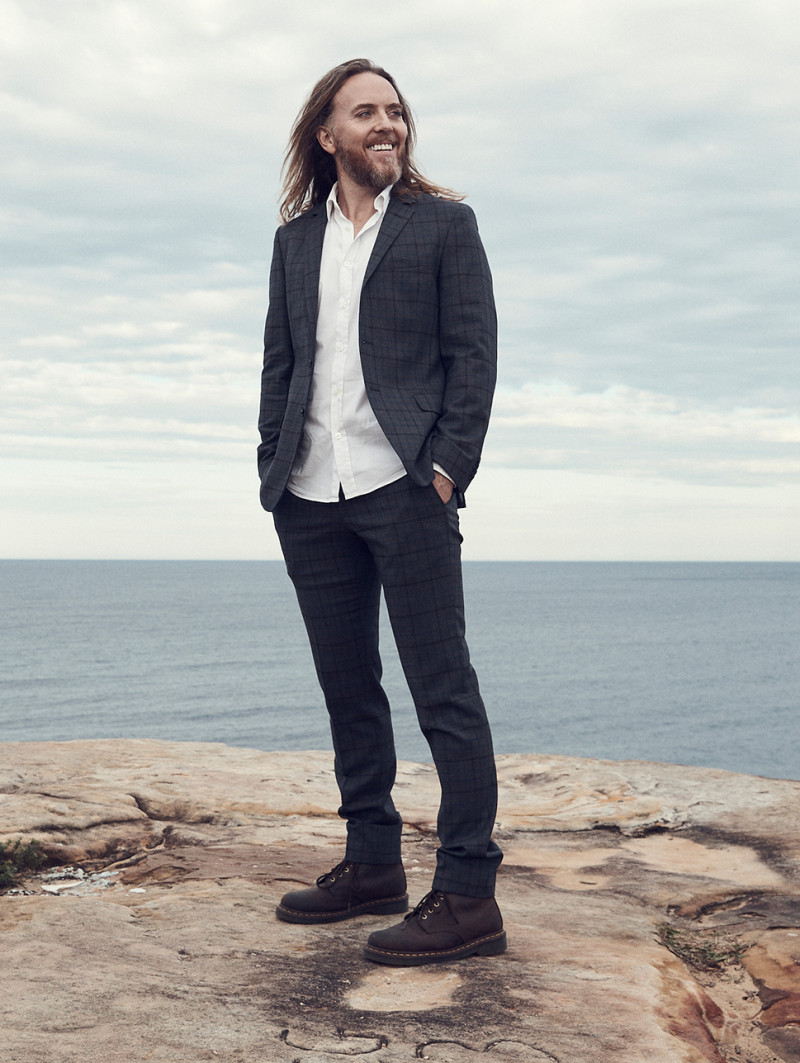 Tim Minchin brings BACK back by Madelaine Empson

You might recognise Tim Minchin for his crisp suit bookended by big hair, heavy eyeliner, and bare feet, often found playing the pedals of a glimmering grand piano. Maybe you know him for Prejudice and Come Home (Cardinal Pell), songs that use humour to address social, religious, and political issues in a way no others do. You might appreciate his compositions for Matilda the Musical and the musical adaptation of Groundhog Day and the musical adaptation of Groundhog Day (I did this joke for him and he liked it). Perhaps you’ve seen him on his acclaimed Sky Atlantic / Foxtel TV series Upright. You might even be familiar with what he calls the “quiet business of science communication” that runs alongside much of his work, echoed in the Carl Sagan, Richard Dawkins, Sam Harris, and Ben Goldacre titles on the bookshelf behind him as we conduct this Zoom interview. Point the camera the other way though, he says, “and it’s all children’s books and cookbooks.”

However you know this multi-award-winning entertainer, you’ll be ecstatic to learn he’s bringing his show BACK – well, back, to New Zealand. On at the Michael Fowler Centre on the 17th of June, this encore return of his sold-out 2019 run is billed as “Old Songs, New Songs, F**k You Songs”, hinting at a setlist spanning all corners of his eclectic repertoire.

You’re a musician, actor, comedian, and writer. Growing up, did you know that a) you wanted to wear so many hats, and b) so many hats from the wardrobe of infinite talent would fit you?

[Chuckles.] I knew I had to wear hats because I’m a bit ginger and I got burnt very easily in the West Australian sun. No, I didn’t even really consider being an artist until after I was one. I had it in my head that there were special people, but I didn’t think I was one of them. I did school plays and stuff, but I never really got the main role. I wasn’t the handsome kid, I got kicked out of the music school because I didn’t go to choir practice, I quit piano at 12 or 13. By the time I really believed I was allowed to be an artist for my living, I had written a lot of scores for theatre and done a lot of plays. I was left alone in my twenties, every agent in Australia said no to me. Because of that, by the time people did take notice of me, I’d been doing all sorts of sh*t for a decade or more. I suddenly became known as this cabaret artist basically, a musical comedian.

Was there a moment when you realised things were working out?

Edinburgh 2005, Fringe. I’d been working with Eddie Perfect and doing lots of comedy-adjacent music, but once I put my own show together of just original songs, and it had poems and bits of weirdness, I was getting a sense that people thought it was really special. And then I did Melbourne Comedy Festival 2005. And people suddenly started coming. I went to Edinburgh that August, and by the end of that year I had played the Albert Hall and I had a DVD deal. That year was the proper break.

I’m going to stop with the hat analogy really shortly –

No don’t, you’re peaking with those caps!

Okay! I’ve read that you refer to yourself as a ‘call comedic minstrel’. What kind of hat would that be? A bucket hat, a beret?

I tend to wear a lot of beanies. It’s a bit like Superman putting on his glasses. When I put my hair up I don’t get stopped so much. I want to be at the edge, I want to wear my beanie all the time. Which is not great in Australia, you get pretty hot-headed.

My serious question on that was actually, what is a call comedic minstrel?

Did I describe myself as that?

According to a lot of sources on the internet.

Neither, I was worried that I would come across badly for not knowing what it meant…

A comedic minstrel sounds right, but I wouldn’t describe myself as that, because I’ve never described myself as a comedian. I’m a songwriter, actor, writer. At the moment my life is writing television scripts and producing TV. I’m a composer lyricist – in terms of the work that’s had the most impact on the most people, it’s my musicals. My most viral thing on the internet is a speech I did. So I’m obviously incredibly grateful that I have a career, I never complain about how people define me. But sometimes I do go, ‘I definitely have done more not-comedy than comedy.’ Minstrel sounds good though! I’m an entertainer. My tools are my piano and my wordy wordy gob. And my funny big f**king weird head… that doesn’t fit hats.

Touching on your musicals, Matilda the Musical won a record seven Olivier Awards, 13 Helpmann Awards, and five Tony Awards. Did you have an affinity with the story before you set out to write it?

Oh yeah, I was a huge Dahl fan. When he wrote Matilda I was already past that age but I read it anyway. I actually wrote to the Dahl Estate in like, 2000, and asked about the rights to Matilda, because I thought it would be a really good children’s musical. And then six years later, the Royal Shakespeare Company asked me if I’d be interested in writing it. If you believed in fate, I was fated to write Matilda. I obviously don’t believe in fate, but it was a hell of a coincidence. So I love that story, and I love writing musicals. They’re hard and they take a long time. Matilda was my first commercial musical. It was such a success, which kind of distorts my relationship with musicals. I’m not driven to write another hit like that. It’s like my orchestra show in 2010, 11, playing with an orchestra, doing comedy songs at the Royal Albert Hall. It was so massive you sort of go, ‘right, I’ve done that!’ Musical comedy, musical satire, that’s slightly the end of the journey there. Which is why I pivoted to writing music for film. I also wanted to stop getting known.

Does that mean you don’t enjoy fame?

Oh no I enjoy it. I think that’s the problem. I enjoy wine and chocolate and when you really really enjoy something, you’ve got to keep an eye on it. The trouble with fame is that it makes you look at yourself from the outside. I’m married to my first girlfriend, I’ve got kids, I don’t go to openings and get free products, I refuse all advertising, I don’t pursue wealth, I do projects that I care about. I do everything that I can to not get sucked into any sort of celebrity culture. But it’s impossible to not feel different when people know who you are. And knowing that there’s people who really care about you and love you and love your work, and an equal and opposite bunch of people who think you’re a stoner lefty bludger. One’s self-esteem should come from the inside. And when you’re in our industry, the reason so many actors and artists are f**ked up is because their sense of self gets taken off them. It becomes something that other people define.

Have you felt the impact your work has had on audiences?

The most extraordinary thing, blessing, privilege, of my career is that I get the most wonderful feedback. When I put out the Cardinal Pell song, I got hundreds and hundreds of letters from survivors of church abuse. I remember one that said, ‘we always knew my dad had been abused, but he’d never ever talked about it and your song came on the radio, and he pulled the car over and started laughing and crying, and talked about it for the first time’. Then there’s this autistic kid who said to his mum, ‘this is how I feel!’ when he listened to Quiet from Matilda… It’s endless and it’s every day. I sound like a total f**khead talking about it, but it’s just literally the best part of my job. When you talk about fame, that’s the bit that you don’t end up talking about. Because actually, I’m not famous because I write pop songs. I’m famous because I express ideas in a certain way. The thing I get paid in, apart from money, is people telling me how that’s affected them. It’s just unbelievable.