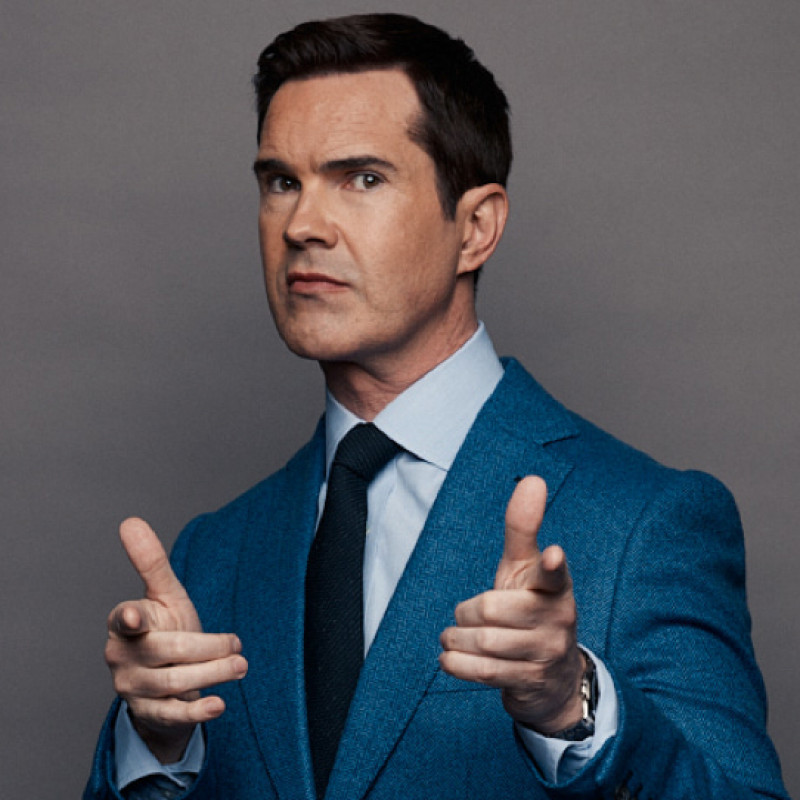 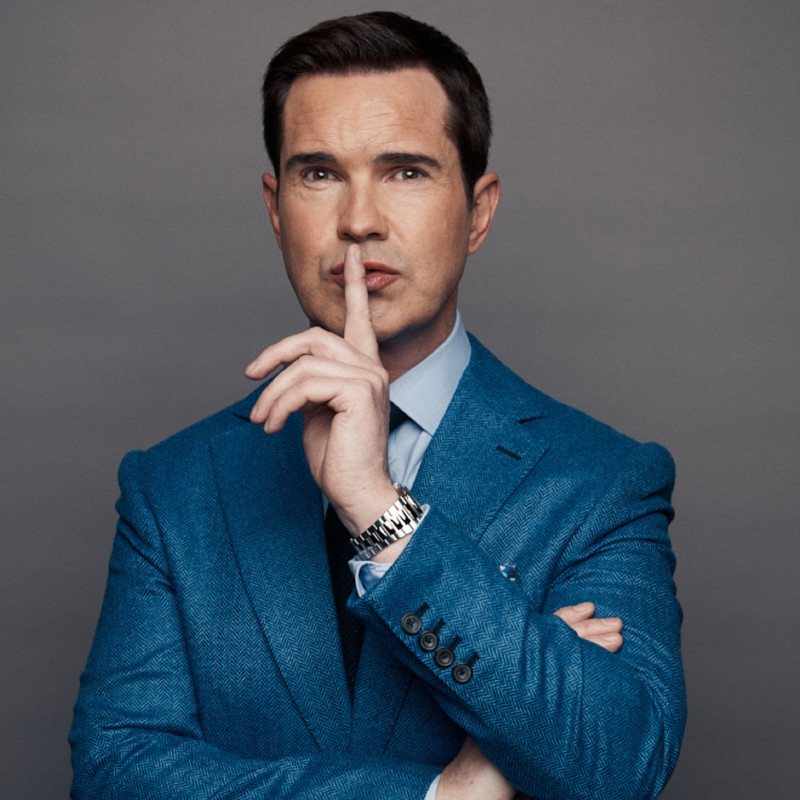 Jimmy Carr, one of the biggest-selling live acts in UK comedy, is returning to New Zealand in 2023. Known for his deadpan delivery of controversial one-liners, the British-Irish stand-up comic, television presenter, writer, and actor will bring the Terribly Funny tour to the Michael Fowler Centre on Saturday and Sunday the 14th and 15th of January.

Alongside his screen credits as host of the panel show 8 Out of 10 Cats and its 18-series spinoff 8 Out of 10 Cats Does Countdown, Carr has performed 10 sell-out stand-up tours of over 2500 shows to more than 2.5 million people. His latest was interrupted by the pandemic and eventually taped for His Dark Materials, which became the most-streamed Netflix comedy special in the UK in 2021. And so, he wrote a brand-new show and went back on the road to finish the tour.

Be warned – Terribly Funny is for adults who know what they’re in for. I interviewed Carr to talk 22 years of comedy and what that might be.

How and why did you get into comedy?

I got into it for the women and I stayed for the money.

I was a huge comedy fan, I used to go to comedy shows all the time. When you start going to comedy you maybe go and see someone in a huge venue, and they do two hours onstage and you think, ‘Wow, I could never do that’. And then you end up in a comedy club watching people doing 20-minute sets, and you think, ‘Wow, these guys are incredible, I could never do that’. And then you get really into it and start doing the deep dive, and you end up above a pub somewhere watching new comics do open mics, five minutes of new stuff, and you think, ‘Well, I could do that’. Your career as a comedian is retracing those steps in reverse. You might end up back in the theatre playing to a big crowd going, ‘Oh, I’m pretty good at this’. I’m always aware there’s someone in the crowd looking at me going, ‘I could never do that’ who will end up doing that.

Did you ever imagine you’d end up ‘doing that’?

It’s interesting. I knew I was going to be a success in comedy way before anyone else, because of how you measure success. When I was playing the clubs in London and earning enough to feed myself and put a roof over my head, I knew that I’d made it. Anyone becoming a comedian to become rich and famous is a dummy – there are better ways to fame and fortune. You do it for the love of it, right? As soon as you’re making money and you can sustain yourself, you’ve made it, great. Everything else is gravy.

What is it about comedy that you love?

The only problem in my job is that work is more fun than fun. A night of work for me is making a thousand people laugh in unison. You’re the games master, the centre of the show, and you’re orchestrating the evening. It’s hosting a party every night of the week, of laughter and joy and fun. It’s a fabulous life.

What kind of kick do you get out of screen comedy versus stage comedy?

Making a TV show is like a team sport. The producers and the writers and the comedians – you’ve got to play well with others. You’ve got to be a generous performer. It’s where I’ve made some of my best friends in the world, and it’s tremendous fun. But stand-up is – you’re a lone wolf. It’s just you up there. It’s great to have a balance in life. I could live without the TV, live stand-up is where my heart is. That’s who I am. And I get to do the other stuff because of stand-up. It’s sacrosanct, because you can’t really be cancelled from stand-up. You can be cancelled from TV, but stand-up – once you’ve got your audience, you’re golden.

How would you describe your brand of stand-up?

I’m pretty edgy. I tell jokes about terrible things that might’ve affected you or the people that you love. But these are just jokes, they’re not the terrible things. There’s a huge difference between making a statement and making jokes, and I make jokes. If you want to hear them, come and see me. If you don’t, I don’t even know why you’re reading this.

A lot of your jokes about terrible things have proven quite polarising. How do you feel about the backlash to your Holocaust joke about the Roma people, branded ‘the Gypsy joke’?

It’s fine. I think I’ve got the right to freedom of speech, and people have the right to object and say, ‘I don’t like that’. I only get into trouble when one of my jokes gets out. It’s like they escape from the theatre or a Netflix special and get out into the real world, and then people take them out of context. If you look at a joke and read it like a statement, okay, you’re going to be offended. But it seems at this age, being cancelled occasionally for a joke is an occupational hazard.

Are there jokes you wouldn’t tell, or any topics that you’d consider off limits?

I get asked that a lot, are there topics off limits. You’re a journalist, are there topics too terrible to write about? No. Is there a disease too terrible to cure, that a doctor would go, ‘No, I might leave that, it’s too awful’? No. You can talk about anything. Comedy is just a way of processing stuff. Some people like a gallows sense of humour, that’s the way me and my audience process the world. Terrible things happen – death and destruction and pain and famine – we’ve got to make it okay somehow.

Does that explain why you think political correctness should be left behind on the stage, particularly in comedy?

Yeah, I think in all fields. I think actually, political correctness is very valuable in our society. No one wants to go back to the 1970s. Things have progressed, things have got better. But I think comedy is a safe space where it’s okay to make jokes. Comedians exist in a space between a public and a private discourse – we mediate that space. It’s an incredibly important thing.

What’s the biggest risk you’ve taken on stage, and did it pay off?

Yes, it did. It was getting on the stage. I was working in junior-middle management for an oil company back when that was a prestigious job. That’s how long ago it was. In the year 2000, working for Shell, raping the planet – that was a different time, the planet was asking for it. Now it seems terrible. But becoming a stand-up comedian, taking that leap of faith, backing myself, and leaning into my edge and what I was best at, it’s been a tremendous journey.

Aha, a joke about terrible things! Cue segue into the Terribly Funny tour.

The show is pretty funny. I don’t know if people really talk about this, but being a comedian is like being a musician – you just get better. I know who I am now, I know my way around a joke. It’s fun getting good at something.

You make a point of getting out and about outside of your shows when you’re on the road. What are you looking forward to about the New Zealand leg of your tour, and visiting Wellington in particular?

I’ve got a real soft spot for some of the smaller towns. I love hanging out in Napier, it’s the most beautiful place. Love Christchurch and the people there. In Wellington, I’m all about Cuba Street. I could come to Wellington, not leave Cuba Street, and have a pretty good time I reckon. Also, Wellington Museum – it’s incredibly good, it’s a brilliant place. I’m looking forward to going back and spending a few hours there. One of the best museums in the world.

The people of New Zealand come out in droves to see me, and it doesn’t go unnoticed – I don’t take it for granted. It’s been a tough couple of years; people who don’t have a lot of disposable income have to make a choice about what to spend it on, and they’re spending it on an evening with me. That means the world.

What would you like to say to your Wellington audience?

Listen, you know what I do, right? I would say warm up for the event. Maybe watch His Dark Materials before you buy a ticket. ‘Do I like this kind of thing, do I find it funny, do I need this in my life?’

Laughter is good. If you’re having a tough time, you’re recently bereaved, you’ve just had bad news from a doctor, you’ve lost your job… if you need a laugh, come to the show. I’ve got you.