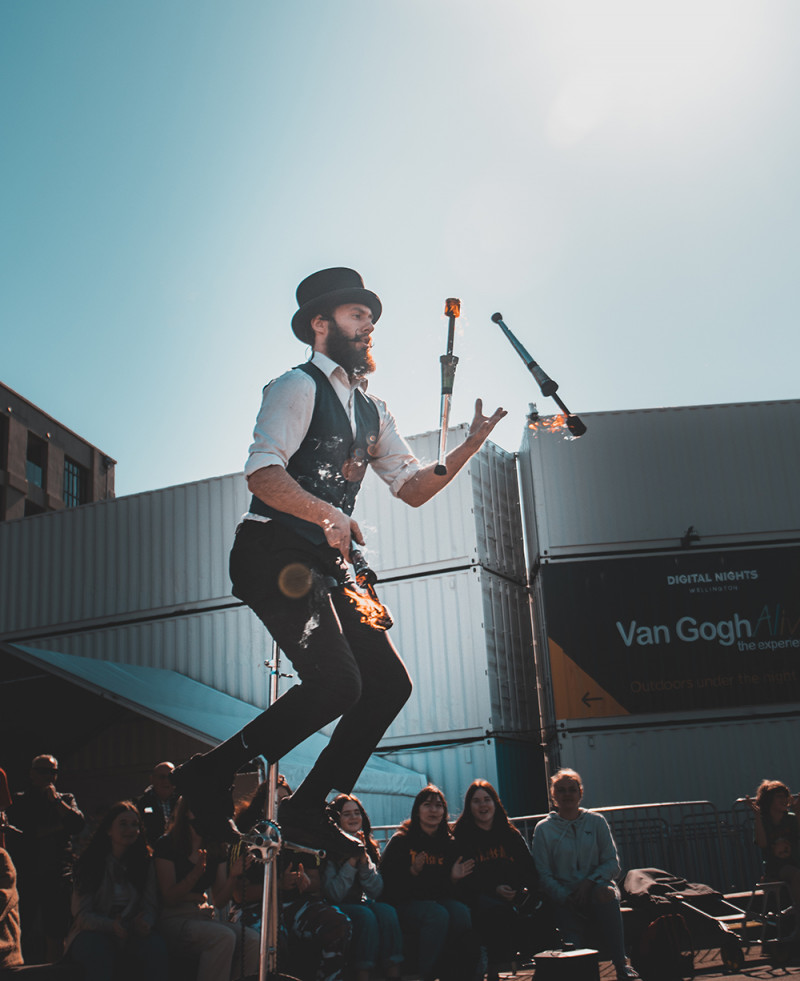 What can you do and how did you learn to do it?

I’m self-taught. I can juggle, roller skate, I was the four-time Australian figure-skating champion for ice dance, I do whip cracking, I can fit my body through a tennis racket while riding a unicycle.

I think I’m the first person in the world to perform that act. I’m touring in May with a circus and that will be one of my acts. It’s quite a difficult trick that’s very specific to my skillset!

Do all of your skills make it into each show?

No, so I have the regular Circus Patrick show and I’m running the Patrick Federer show, which is my tennis character – he’s the younger brother of Roger Federer. He considers himself the Master of Love and the Racket Man. The whole show is just bad tennis puns.

How did you get proficient in the circus arts?

I had a sporting scholarship to university for ice skating. I trained in Russia, Canada, and America. I was used to training for eight to 10 hours a day, so I didn’t know what to do with myself when I retired. I ended up training juggling all day every day for a while, and other circus apparatuses.

Do you remember your first-ever solo street performance?

In Sydney in 2018 I hopped up on a unicycle and juggled some things – I can’t remember what they were, might have been clubs, might have been fire torches. It didn’t go well. The first person who came up after the show was my volunteer, and he gave me a five-cent coin. Not a good sign, but I’ve still got that coin to remind me where I came from.

What’s the most memorable thing that’s happened during a performance?

It was in London. This little girl came up, she was amazing, a great volunteer. She really enjoyed herself. I saw her parents in tears filming. They came forward after the show and said ‘you may not know this, but she’s autistic. This was the first time we’ve ever seen her like this.’ They’d avoided putting her on stages or in the theatre because they thought it would be a traumatic experience, but being onstage had brought out something new in her. I got an email from them months later saying she’s now heavily involved in her school theatre and everyone loves her, that’s where she’s the most comfortable. So that’s the most touching experience I’ve had, helping a family find what helps their kid get through life.

You’re a full-time street performer. Does it get tough?

I frequently question all of my life choices, and it’s especially hard in winter, but I get by. I just love it.

Why do you think the circus arts have such a wide-ranging appeal?

Regardless of whether you’re a kid or an adult, you still find a man trying to fit his body through a tennis racket quite funny. Or you find someone high up in the air on a unicycle juggling dangerous things scary. No matter where you’re from, you can understand that balancing wine glasses on a knife between your teeth is scary. Whatever language you speak, circus is universal and accessible.