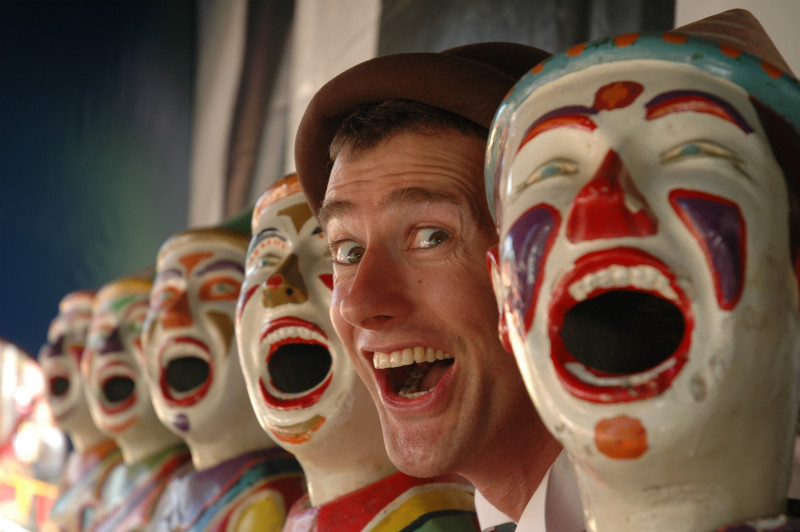 Is it fair to call you, primarily, a clown?

Controversial question – I’m glad you asked. I’m very happy to be called a clown. They’re my heroes. If children have a positive experience watching a clown you can really change their perspective.

On that note, you don’t look like the traditional whiteface clown with frizzy orange hair and a red nose?

It’s a very broad church with many different styles. When I started full time, over 30 years ago, I did wear a red nose. I got about 10, 12 years in and was going off to do a show, said goodbye to my family, and went to put my nose on. I thought, ‘I’m spending my adult life with this plastic thing on my face. What am I doing?’ [Chuckles.] The nice thing about not wearing the makeup or the nose is that when you’re doing a show, there’s a little bit of mystery in the beginning. People like to categorise you early on, and I think that mystery can help bring audiences into your world.

Has your clown character developed in other ways over the last 30 years?

Yes, the nice thing about clown is that it’s your personality. I’m not an actor, I don’t play different characters. I play a heightened version of me. As I’ve got older I’ve got more grumpy! I’ve embedded myself more in that persona.

How did you come up with your famous clown boxing routine?

About 10 years ago when we moved back to New Zealand – I’m British, my wife’s a Kiwi – I walked past a martial arts shop in Brooklyn, and there was a giant-sized pair of boxing gloves in the window. Within about 20 seconds I’d written a routine in my head. I challenge an audience member to a fight and give them normal-sized boxing gloves while I put the giant ones on… I’m proud of the boxing show, I’ve always wanted to pay homage to Charlie Chaplin, my hero. I’ve toured it in probably about 30 countries so far.

Wow. What are some more ‘pinch me’ (or should I say ‘punch me’) moments from your career so far?

A special moment was when I played China at an acrobatics festival and I won bronze for New Zealand. I thought that wasn’t bad for a middle-aged clown from North London. I followed a Mongolian troupe, and then the sea lions came on after me. I thought, ‘How did I get here?’

I’m very proud of a double-act I did in the late 80s, they’re called The Hoons. That did well in London.

There’s a very warm place in my heart for Fiji. I did a show there, and when we arrived we found ourselves on the Breakfast Morning Show. They said, ‘So Fraser, what are you going to bring to the Fiji showcase?’ And I unfortunately said I was going to punch as many people as I could! The DJ who was on next, Finoki, took this as a personal challenge, and he challenged me to a fight. Word got around and the show sold out. I was told to pick him from the audience and he was massive – absolutely massive. But it turned out this guy was Finoki’s trainer. We had a fight and I won. There was a rematch that went out on the TV, taxi drivers were putting bets on it, the President of Fiji came out and watched! I went down in the third round and Finoki won. The crowd just went crazy.

How does your year look now that you’re in New Zealand?

This time of year I’m usually in Europe – this is my second winter since 1995, I’ve been following the sun doing shows outdoors. This year I’ve been doing more directing, teaching, writing. I’m directing Mr Fungus’ show coming up [at Circa Theatre this October]. I’m doing some mentoring too.

Most of the street performers I’ve interviewed cite you as a big influence. What would you say to other artists hoping to set out into the industry?

Just keep watching and learning. There are so many amazing acts out there, I’ve got a collection of about 300 clowns on my YouTube channel, which you can find at fraserhooper.com. There’s no one way to learn clown or performing. Just immerse yourself in the world and find your tribe; like-minded people who are just as stupid as you are.