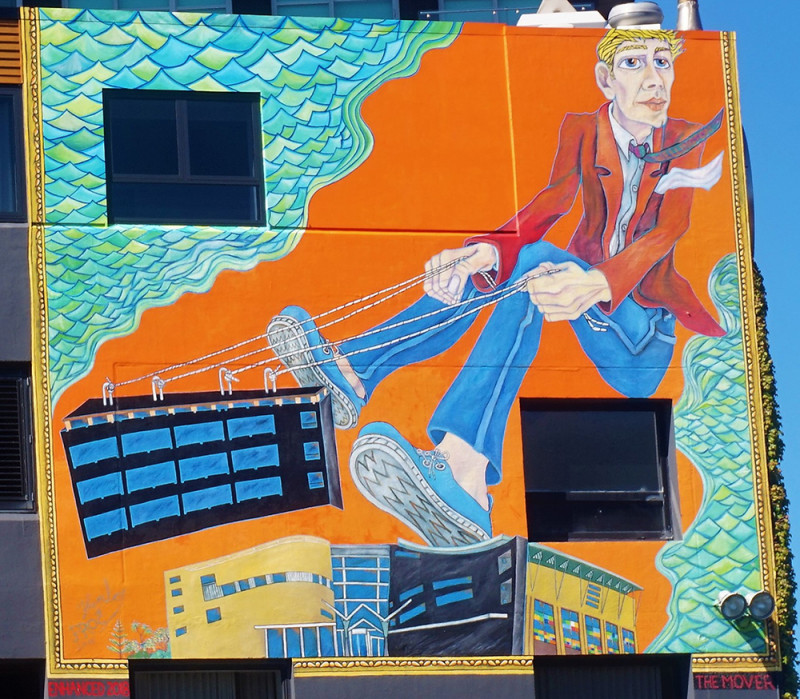 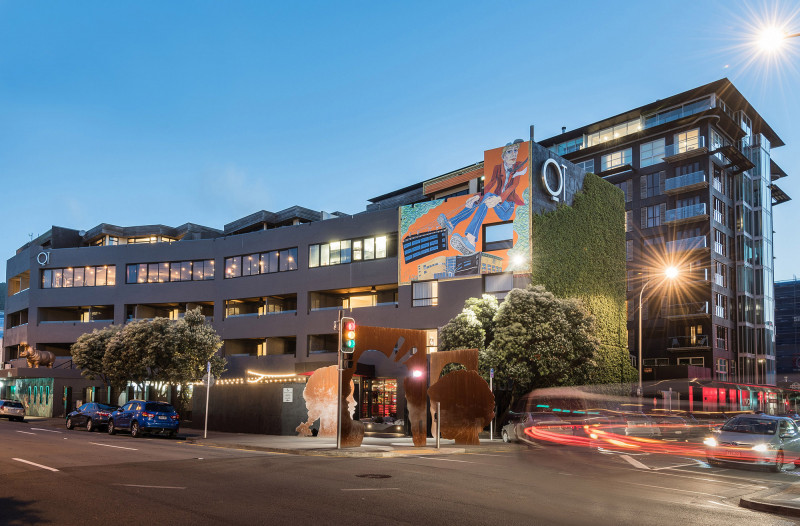 What fascinated you about the story behind the moving of the QT Hotel (then the Museum Art Hotel) and how did pitch your concept for The Mover?

Anna: We heard that Chris Parkin is an art lover and that he organised the move of the hotel from the strategic location at the waterfront to make way for the national museum, Te Papa, in 1993. This prompted us to visit the hotel. We noticed that while the lobby was filled with artwork, the front had nothing outstanding. So the concept of a mural portraying the story of the hotel was born. We knew that this idea would complement the owner’s passion.

Gabriel: Chris was familiar with Berlin’s East Side Gallery, the world-renowned peace monument that includes my mural, The Wall Jumper (1989). He wanted a work of this kind on the wall of the hotel. We proposed to depict the story of the move of the hotel, using the same figure as on the Berlin Wall. It comes from our artistic concept of capturing a moment, a collective atmosphere that later becomes a common memory: in Berlin, it was people’s wish to cross the wall, in Wellington, it was the engineering success of moving the hotel. By memorialising the hotel’s story in our art, we aimed to honour and cement its legacy in the people’s consciousness. In addition, the image of The Mover leads to another story: in our representation of the move, we made reference to the iconic legend of Māui pulling the island.

Your style is cartoon, but perhaps more detailed than one might assume at a glance. What inspired the aesthetic we see in The Mover?

G: I developed my style when I was at the École des Beaux-Arts (fine arts school) in Paris. At the same time, I had classes in Budapest with a student of Gustav Klimt’s. My art is a mix of pop and expressionism. I began to use this style in the middle of 1980s in the International Auction House in Paris. It lends itself very well to the technique of painting a mural with a brush, as did Gustav Klimt or Diego Rivera. The vivid colours make the work stand out in public spaces. It is able to compete with advertisements and catch viewers’ eyes and attention.

The mural was ‘enhanced’ in 2018, were you involved in this process?

A: We were asked to enhance The Mover in 2018 as the new owner was conducting a project to transform the fourth-floor rooms into art rooms. He then added a room and asked us to enlarge our work.

The Mover was completed in 2010, soon after you moved to New Zealand. How has your time in Aotearoa affected your artistic output?

A: Working in Aotearoa we were confronted with a new reality, of culture, of people, of a story. So it was a challenge. It certainly gave us fresh inspiration and influenced our style. We tried to capture the local flavour, often to twist it within a global context. We aimed to marry European art with the spirit of Aotearoa. We felt that we were doing something useful and unique. Also, working together gives us the opportunity to create gender-nonspecific art, to blend the male and female essence in each piece. We are pleased that after nine years we were appointed to represent New Zealand at the Beijing International Art Biennale. 10 years into our creative journey, we feel a part of this country.