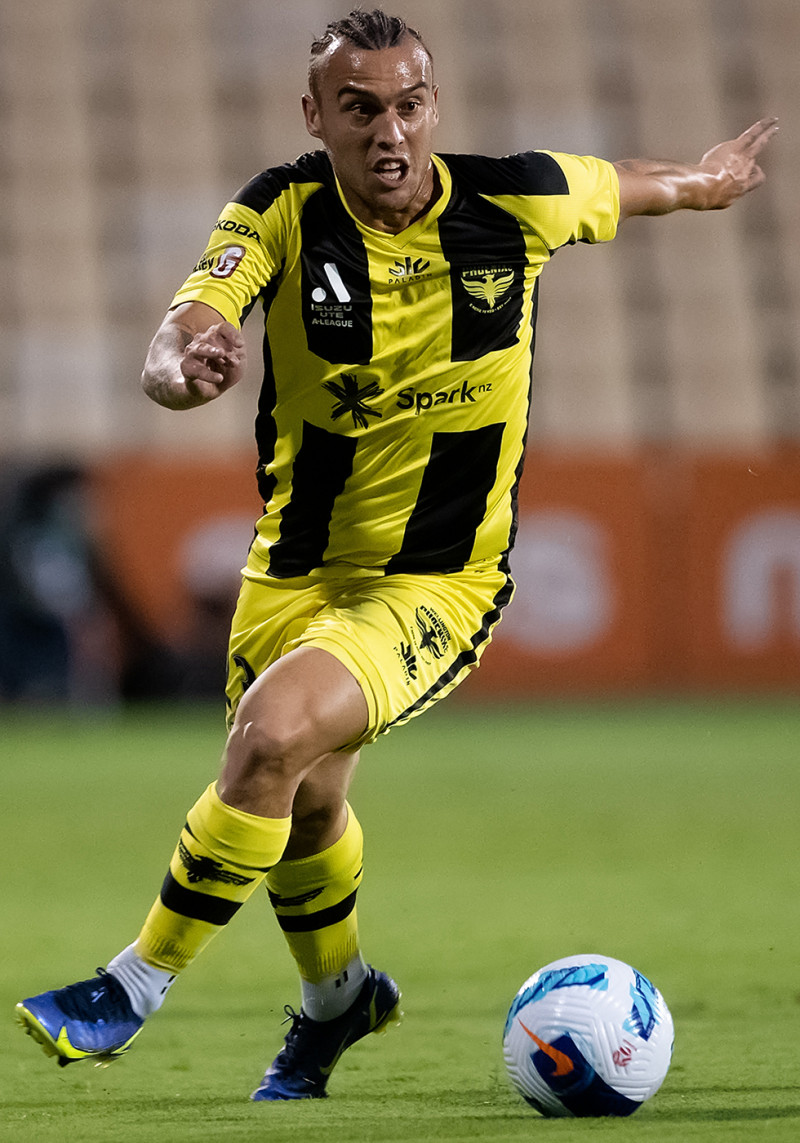 Rising to the challenge by Harry Bartle

To begin our new Wellington sportspeople series, I sat down with professional footballer Clayton Lewis. Born and raised in the capital, the 25-year-old has already enjoyed an extremely successful career. He currently plays as a midfielder for Wellington Phoenix in Australia and New Zealand’s premier football competition the A-League and he has also represented New Zealand in under-20s, under-23s, and men’s football, playing 18 games for our top national side the All Whites.

Along with appearing in a FIFA U-20 World Cup and FIFA Confederations Cup, Lewis became New Zealand Olympian 1452 when he was selected for Tokyo 2020. Most recently, he was a part of the All Whites’ 2022 FIFA World Cup qualifiers where he helped the side come within just one game of qualifying for Qatar 2022.

Did you always want to be a professional footballer or was there a moment when you knew that was what you wanted to do?

Growing up both my parents played football, so it was relatively easy for me to get into it. Watching my dad play every week I kind of wished I could do what he was doing. But also, when I was about 12, I was playing both basketball and football and trainings were starting to get pretty intense so I had to pick which one I would rather continue. Since I wasn’t going to grow much taller [laughs] football was the way to go and I’m glad it’s all worked out so far.

You’re now playing for your hometown club Wellington Phoenix. How proud are you to represent a team you supported growing up?

After the club first established when I was around 10, it was always something I looked forward to trying to achieve when I was older. Now that I can actually call myself a Phoenix midfielder, that’s a pretty cool thing. My next hope is that we can get back to Wellington and play in front of our fans because the one game I’ve managed to play at Sky Stadium is one that I’ll remember for a very long time.

And we’re looking forward to having you back! How tough has it been being based in Australia for the last two seasons due to COVID restrictions?

Every footballer wants to play in front of their home crowd and we haven’t had that opportunity for the best part of two years. But on the other hand, we have all shown that we can go to these tough places and do really well. We made the playoffs with a young squad last year and that just shows how much we excelled in a difficult situation. It required hard work and dedication, but we were all up for the challenge.

What was so special about that one game you’ve played at Sky Stadium?

Everything just rolled into one awesome experience. I had just seen my family for the first time in months which was big, and then I managed to sign a two-year extension with the club later that week. The atmosphere at the game itself was amazing and then for me to score that first goal of the match which helped set us on our way to a dominant win, it all just showed how much Wellington fans make a difference for us.

What’s your approach on the pitch?

Well you know I signed as an attacking midfielder but I’ve just slowly been moving back each year [laughs]. But nah, I like to assist more than I like scoring. Obviously I enjoy having the glory sometimes but at the end of the day it’s about winning so I don’t mind doing the work that no one really notices. Like assists, not many people notice the defensive side of the game but I believe, especially today, you have to be an all-rounder, be able to do all sorts of things. With that mentality I’m starting to learn that it’s not just about attacking. I let all the creative players do their thing and I just try and win the ball back as much as I can, that sort of stuff.

You signed with Scunthorpe United in England in 2017. What were the emotions after securing that first overseas contract?

It’s something you always dream of when you’re a kid. Playing football in New Zealand you don’t get many opportunities but I was lucky enough to get a chance after a good U-20 World Cup and Confederations Cup. It all happened so quickly, and it was something I just couldn’t pass up at the time. I made the move over and it didn’t quite work out how I wanted it to so I decided it was better for my career if I came back home. Fortunately, everything has since fallen into place.

When did you realise that playing for the All Whites was a possibility?

It’s an interesting story actually. Before I made the move to Auckland when I was 17 I basically found the U-20s coach myself and asked him, ‘If you had to pick a World Cup team right now would I be considered?’ He said, ‘Look if I had to pick a team tomorrow, you wouldn’t be in it’. That was really tough for me to take but then I suggested moving up to play for his team Auckland City, would that help? He replied, ‘It can’t hurt’. Within just six months of moving the All Whites’ coach fancied me and chucked me straight into the men’s side. That was the biggest moment of my career early on.

You scored against Fiji in March this year. That first international goal must have felt good?

It was pretty awesome. I don’t get forward too often so when that penalty came, I just grabbed the ball and no one was taking it off me [laughs]. It’s a moment I’ll cherish forever and hopefully there are some more goals to come.

Earlier this year you came within one game of a FIFA World Cup. What was going through your mind after that 1-0 loss against Costa Rica?

I was part of our Peru campaign in 2017 when we also came close to qualifying and for me, I was way more disappointed this time because I don’t think we deserved to beat Peru. I felt in the Costa Rica game we pretty much dominated. They scored early on, but I still feel we scored a legit goal to even it up. However, the ref disagreed. There were moments throughout that game where we probably should have done a little bit better, but overall, we showed everyone that New Zealand isn’t a country you can just walk over anymore, so that’s a positive at least.

What is the lowlight and highlight of your career so far?

For me personally, my ankle injury last year was tough. We [Wellington Phoenix] were progressing so well as a side, I had just scored for the All Whites, and I was feeling great about my football. Then when I suffered that injury, tore up my ligaments, all that was going through my mind was, am I done for the season? Am I going to miss the qualifier? That sort of thing. The highlight would have to be making my debut for the All Whites but then again, not many people get to say they’ve played against Cristiano Ronaldo so that’s gotta be up there too.

You grew up in Welly. What do you love most about the city?

Definitely not the wind [laughs]. Just the general people and vibe, everyone is really nice here. I’ve lived in England and Aussie and I still think the Kiwi culture, like the way everyone just says hi to each other as they walk by, is such a cool thing.

I think we can all agree it’s not the wind. Finally, what’s the biggest goal, pun intended, you want to achieve?

As a diehard Liverpool fan, the ultimate dream would be to play for them one day. But I think realistically right now making the next World Cup is the plan for both myself and the All Whites. With the way we are playing now, I really think we are going to achieve it.