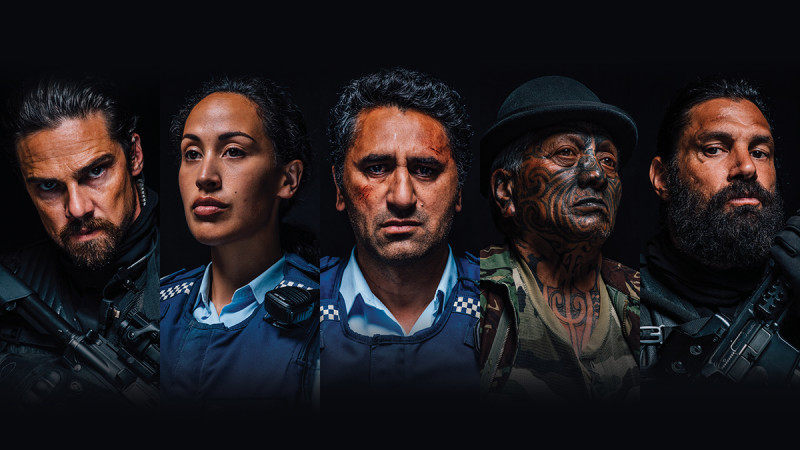 On the 15th of October 2007, under suspicion of domestic terrorism, the New Zealand Police swooped on the people of Tūhoe, raiding homes in the small town of Rūātoki in the Bay of Plenty. 14 years on, the controversial raids will be examined in Muru, a gripping action-drama set for release on the 3rd of February.

Muru stars Cliff Curtis as local Police Sergeant ‘Taffy’ Tawharau, who, when the Government launches the raids, must choose between his badge and his people. Co-stars include Jay Ryan, Manu Bennett, Simone Kessell, and activist Tame Iti, who was one of the many arrested that day.

The film was written and directed by award-winning filmmaker Tearepa Kahi, known for his previous features Mt. Zion and Poi E: The Story of Our Song. Kahi says Muru was made with “a Merata Mita and Geoff Murphy spirit, a Tame Iti authenticity, and a Cliff Curtis commitment to craft.”

“Shooting a film on location in Tūhoe during a pandemic brought an interesting set of challenges to our already challenging story, but the shared understanding and full support of local Tūhoe marae and kaumātua, cast and crew allowed us to move through the shoot at a deliberate pace and create characters with shape that we hope will create a deep cultural impact and speak truth to power.”

Muru is the first feature to be funded under the New Zealand Film Commission’s He Pounamu Te Reo Māori Feature Film Fund, which has been established to champion Māori storytelling in films with majority Te Reo Māori.