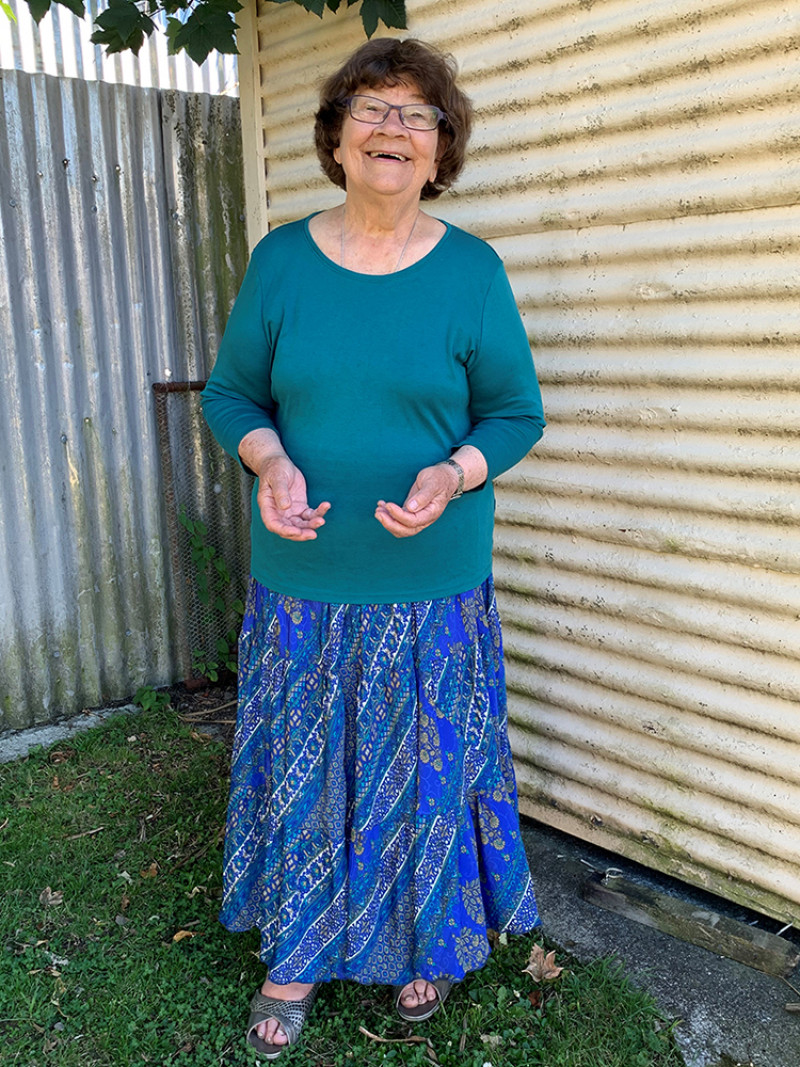 Joy Cowley began writing for children at 16 years old thanks to an after-school job editing the children’s page of the Manawatu Daily Times in 1953. As a “great devourer of books”, she loved that role for the opportunity it provided to impart her love of reading to other children. Cowley went on to become one of New Zealand’s most successful children’s authors, having written what she estimates to be 1100 titles for early readers. Among them are such beloved series as Mrs. Wishy Washy and Greedy Cat, alongside books like Nicketty-Nacketty, Noo-Noo-Noo that shaped many of our childhoods – my own included!

With Cowley now living in Featherston in a little cottage with her husband Terry, fans will have their chance to meet her in person at Featherston Booktown Karukatea Festival. On Saturday the 8th of May, she’ll participate in the workshop My Kids Aren’t Reading, What Should I Do? at Kiwi Hall from 4:30pm to 5:30pm. On Sunday the 9th, she will be in the Joy Cowley Room at The Royal Hotel in conversation with David Riley as he launches the latest biography in his Wāhine Toa series, Joy Cowley, from 12 noon to 1pm. Catch her in the afternoon at Chicken & Frog Bookshop, where she’ll sign books and read to our tamariki from 2pm to 4pm.

We caught up ahead of the literary festival to talk about her remarkable life and work.

You went on from your role at the Manawatu Daily Times to have a prolific career in children’s literature. Did you imagine then what you might achieve in that world?

Look Maddi, none at all. No idea! In those days you did what your parents told you to do, and then I got married quite young. I’d just turned 20, and within five years, I had four children of my own. So this was marvellous. My own children started me really writing for children in a serious way.

My first son Edward wasn’t reading. He had a very wise teacher who held up a Janet and John book to me and said, ‘there is no reason why any child would want to read this book’. And she was right. I spent a lot of time working in classrooms thanks to teachers who accommodated me, and I soon learned that children need to see themselves in their reading. There was Edward and other children who I worked with who were behind in their reading. We always started with story talk, because I believe you can’t bake bread in a cold oven. We’d focus on their interests, what they did on Friday night, what kind of sport they liked the most. Once I got enough detail, I’d make a little booklet for them. And no child was ever reluctant to read his own story.

Teachers were taking some of the stories that I’d done and making big books out of them to use in the classroom. Big books out of brown paper, and they kept asking, ‘why don’t you get these published?’ Well I did send them away to a few publishers and they weren’t interested, until someone recommended a woman in Auckland, and that was Wendy Pye. She worked very hard to get our stories published. No professional illustrator was interested, so I went round the art schools, the colleges, finding young people who were talented and wanted to illustrate children’s books. One of those people was Elizabeth Fuller, who did Mrs. Wishy-Washy. The first lot was 24 books published by Wendy Pye. They were going to be for New Zealand teachers. We did not expect those stories to go around the world.

If you wrote stories by going into classrooms then, what is your writing process now?

I’m not doing a lot of writing now because my sight is diminishing rapidly. I’ve got 30 percent vision in one eye and none in the other. It’s macular degeneration. I write in 48-point print. I smile at that, because I think ‘this is kindergarten print, and it’s a symptom of second childhood!’

You have travelled a lot doing writing workshops and working with children around the world. What are some of the most special moments from your travels over the years?

I have a lot of special moments. I actually learned not to talk down to children at a school in Jordan. I had a whole lot of five-year-olds in front of me. Five-year-olds don’t often know what a question is. You say, ‘do you have a question?’ and someone will say, ‘I’ve got a puppy at home!’ So I said to them, ‘do you have a question that you would like to ask? Now you know what a question is, don’t you? It’s when you want to find out something. For example I could say to you, why do you think the leaves fall off the trees in winter?’ And this five-year-old kid in front of me said, ‘it’s because the chlorophyll level drops’. [Laughs.] His teacher put her hand over her mouth, and I think she might still be laughing.

Another very moving thing happened at a school in Hawaii. When I went into a classroom, every time I went, they would put a lei round my neck. Near the end of visiting this particular school, it looked as if I was poking my neck through a hedge of leis. They were lovely. Just as I was going out the door, the last class and the last time, this little boy came running up to me and said, ‘I’ve got a lei for you’, and he had a black cord. I looked down and his shoelace was missing. He’d taken it out and he wanted to put it around my neck. I’ve still got that black cord, the lei I got from this little six-year-old. Isn’t that neat?

You’ve written celebrated adult novels but consider yourself a children’s author. Why?

That’s where I’ve been the happiest. It’s never too late to have a happy childhood, is it? I think I redeemed my own childhood, which was quite serious because I was the eldest of five with a lot of responsibility as my poor parents had really bad health and probably a bad marriage too.

So writing for children helped you to live another childhood vicariously?

Absolutely. The stories I used to tell to my sisters every night were always about very powerful kids who could overcome anything. I guess those were the kind of stories we all needed as children.

As a children’s author, what words do you live by?

To love and respect children where they’re at, not to impose adult values on them.

We’ve barely scraped the surface of your life, but is there anything you would like to add?

I’m taking full-time care of my husband Terry. Over the last few years he’s had five strokes. He is such a beautiful, gentle man. Our world might be small, because he needs care 24-7, but it is beautiful. I understand how lovely every part of the life journey can be. We are opposites; we’re very different. We complete each other. I always say Terry’s the part of me that’s missing. And at the moment he’s got good sight, and that’s great, but he is losing his mobility – I’ve got a strong body and poor sight! I’ve heard a lot of people talk about the difficulties of age – well, yes, some things are difficult. But then a lot of those difficult things are very funny. They amuse us. There is something quite special about journeying together in the last years. And because we are who we are, we think about it like the body going into labour to give birth to the soul.