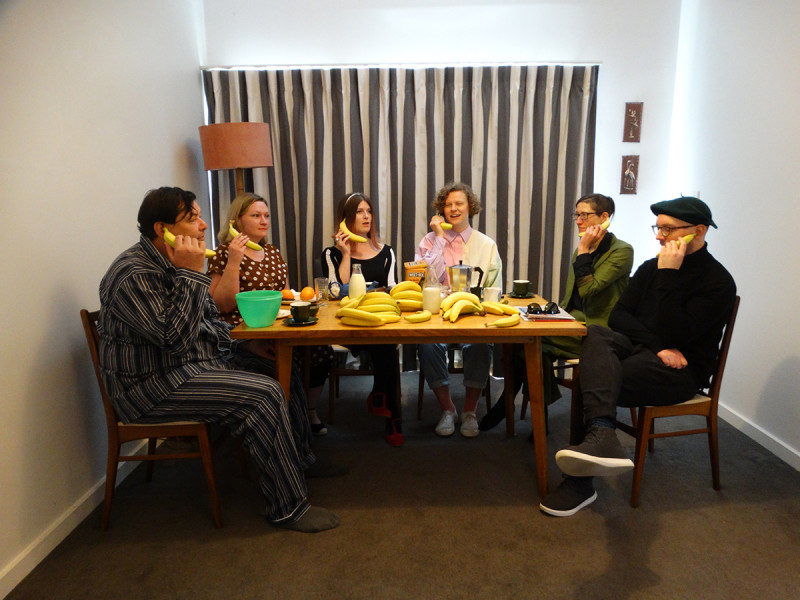 Forget your problems with Tidal Rave

Wellington jangle, surf, fuzz-pop sextet Tidal Rave is back to play Newtown Sports Bar after COVID saw the August tour of their new Albumette cut short. They’ll perform the eight-track release on the 8th of October and will go ahead with 100 people if Pōneke is still in Level 2.

“The recording sounds darker and heavier on Albumette, and the band’s songwriting mixes echoes of the kind of hard-edged driving post-punk rock of Vivian Girls with the melodic flair of Dead Famous People, and the jangling energy of Look Blue, Go Purple”.

With the feature single titled Banana, Albumette was written primarily during the lockdown era of 2020 and explores pertinent themes like disconnection, problematic capitalism, and in-between spaces. Eggleton says the band was able to tour for just one weekend before lockdown struck again in 2021, playing Auckland and Ragland with a rush-hour drive in between.

“Rush-hour feels like a weird word to use, as it was the longest three hours of our lives.”

The bassist and keyboardist is looking forward to “the whole ritual of playing a show” again and wants Wellington audiences to get out of it what they would any good show. Hopefully Tidal Rave will “have you meet some new people, give you some exercise, and help you forget your problems for a while”.