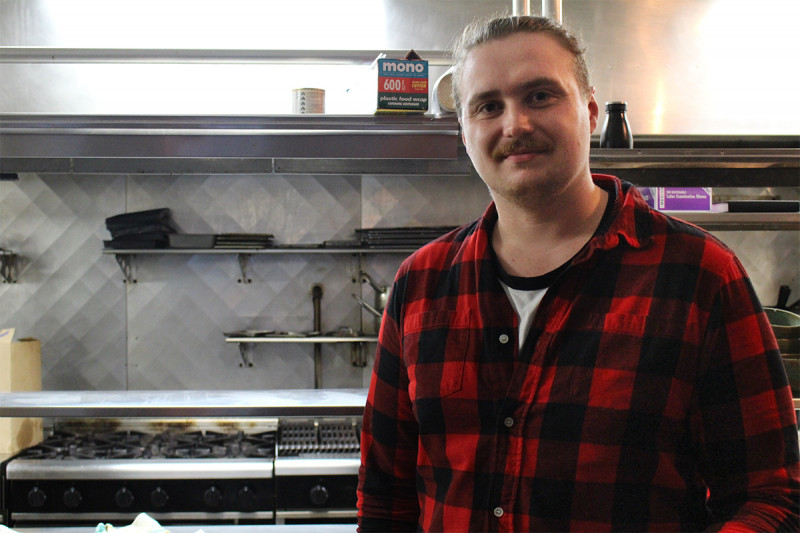 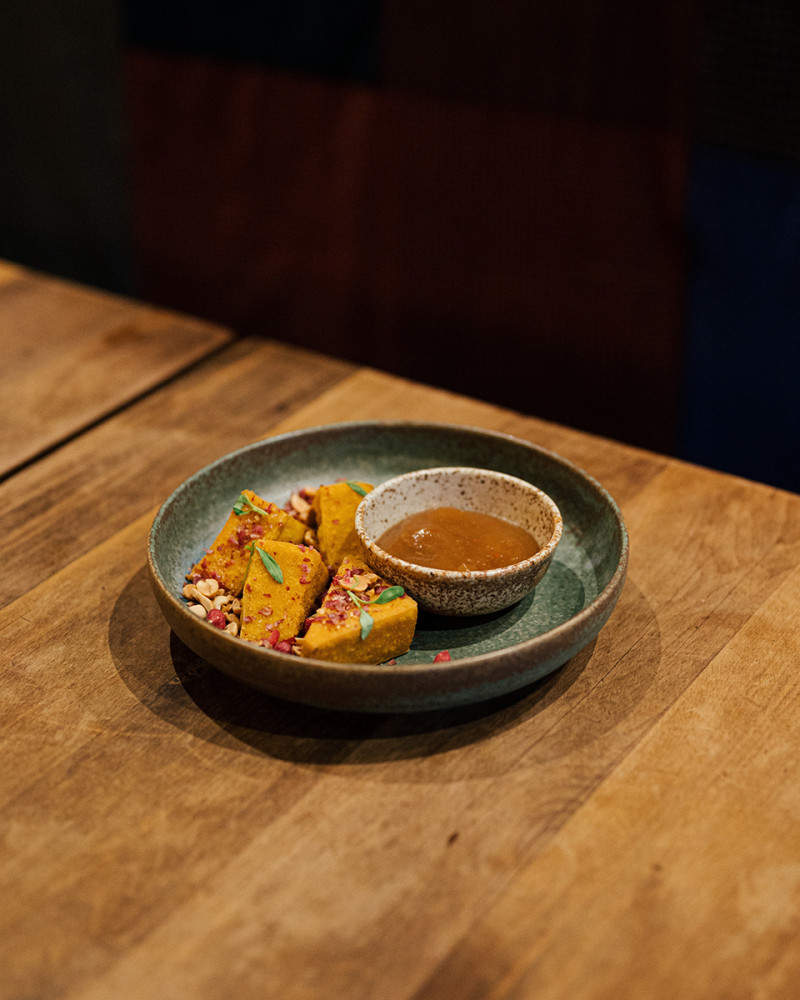 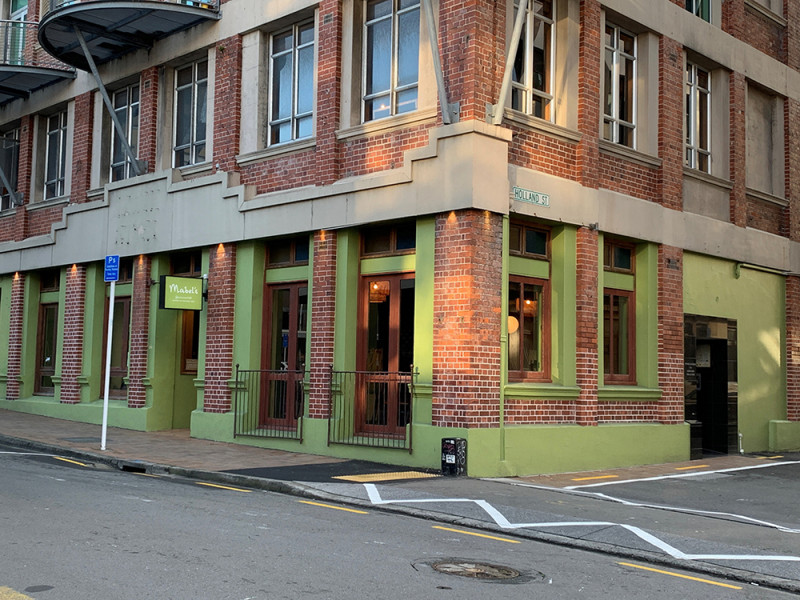 In our Chefs of Wellington series, we talk to the chefs behind some of our favourite local restaurants. Alessia Belsito-Riera chats to Nathan Auld, the head chef of Burmese restaurant Mabel’s on Tory Street.

Can you tell me a bit about your upbringing and how you developed an interest in food?

So I was born into a mildly standard New Zealand Pākehā family. Mum was always in the kitchen cooking. At a young age I had a lot of interesting things to cook. I was involved in house parties and doing those kinds of things growing up and I'd be off in the corner watching and learning. I spent a lot of time in the kitchen with my grandmother as well, doing all sorts of baking stuff that we used to do for church. Then it developed into a full-time job – accidentally, to be honest. I was 16, found a job as a dishwasher and developed from there, just progressed and hit all the marks and kept going.

How did it transition from that first job into a more professional craft?

I think the first time was when the owner of the business gave me a bit more capacity, he gave me options. He showed a little bit of faith in me and rewarded that. Then I went to culinary school [at WelTec], I was working full time and doing that full time. Then went back to work with him.

Are you from Wellington?

Born and raised. It’s pretty much a permanent base. I went overseas to England for a little bit, worked over there in some nice places, met some lovely people, and then it got to about January last year and Mum called me and was like, “This [COVID] is getting a little bit too real, you should probably come home”, so I did.

Why did you choose to work at Mabel’s?

I've known Dan, Ian, and Marlar for years. They own Crumpet Bar as well. I used to go there all the time. It's quite literally my home away from home. I got back into the country on the 17th of April. They didn’t know I was coming back, they had asked me to come back in October without actually telling me why, so I just walked in there on a Monday afternoon or something like that and then Dan was there and was like, “We've got a job opening for you if you want it”. Then we got to talking about Mabel’s and everything was pretty much sold from that point on. They were just securing the site that week, so I've been involved in every step of the way since then. It was really fun. A lot of challenges on the way. We had our opening day pushed back, mostly due to COVID.

Would you tell me a little bit about the history of Mabel’s?

It's a really cool story. It's probably the main reason I got involved aside from Dan and Ian. So Marlar’s grandmother owned and operated pretty much the first Indian-esque, Burmese-esque restaurant on Cuba Street in the 70s. At the time there wasn't much of a large migrant community in New Zealand and she was just basically cooking curries and things from home and had a really good public reception. I think that ran for about 10 or 12 years. It had such a meaningful impact on a lot of people's lives. Since we've set [Mabel’s] up, we've discovered more and more connections, people who knew and grew up with her and what the restaurant meant to them. And the work that she did later in life as well to help set up a Buddhist temple in Stokes Valley and a space for the whole collectivism. She's one of the founding members of that. I didn't get to meet her, but she was a really big part of Marlar’s life.

It has got to be learning and development, every day is different. And it's the general progression. Part of me is also really into the whole cultural side of it. In my head food is the first thing you do when you go to a place and you can't speak the language or interact because they share food, right? I feel like food is the bridge stone into sharing cultures, growth, and all the rest. What I enjoy about doing something like this is I get to learn from people about their culture, and they get to show me how they make things and we get to produce something like this. So we can share with everyone.

How would you describe your leadership style in the kitchen?

I work very much with my team. I grew up in a lot of kitchens that weren't necessarily nice places to work. It's all about attitude, and again, culture. You have to create a space in which everyone feels comfortable first and then you can start the teaching moments. But I'm so lucky to have fantastic people around me. It’s a little bit overwhelming sometimes, especially if you're opening a new business, and you have to have people who are keen to learn everything. Having people around you to help enforce that culture of acceptance and growth and learning. It’s more team-driven than anything else. It's a very open kitchen so we pretend there's a wall up and we sing and we dance and we have fun. It's fantastic.

How did you go about designing the menu?

It was a process. I came into this knowing absolutely nothing about the cuisine or Myanmar, or even very little about the country itself. I've had some really fantastic people, especially Marlar and her family, come in and teach me about the food and how they eat and what flavours are used. It's completely foreign to a lot of people, including myself. You have to retrain your whole palate. I had a lot of resources, but not many fundamental restaurant resources, so it was basically trial and error with a lot of help from the community around me. What we're trying to do here is more what Marlar grew up eating, what was available in your household, and what she's had on their trips and travels across the country.

Do you plan on changing the menu?

100 percent. It's so vast. We've kept it relatively standard for the first three months but I'm pretty much down for changing things weekly, daily, not just with the seasons.

How would you describe Burmese cuisine to someone who's never had it before?

It's a little bit of everything around it; it's got a little bit of Indian influence, a little bit of Chinese, a little bit of Thai, a little bit the Bangladeshi, and then a lot of itself. So it’s taken these aspects of the cultures around it and kind of made them better, in my head. They’ve combined them in this interesting way and you get really subtle and really flavourful, deeply savoury curries to these 20-ingredient textural salads. You have sour, sweet, salty, and deep umami as well. Like with Lahpet, pickled tea, it’s the only culture in the world that actually eats tea.

What is your favourite dish on the menu?

There's a lot of really good memories with a lot of them. It’s a twofold question, so my favourite one to eat is probably the pork belly curry. But a sentimental one is kulfi. We make it in-house and it's similar to semifreddo. Me and Ian were doing a pop-up of curries late one night. We decided to do from 8pm to 3am. So it's like 2am on Sunday, and we're really hungry. All we have is rice, roti, and curries, so we deep fried the roti, covered it in sugar, and then [added] kulfi. It’s probably the most unique thing on the menu.

What do you think makes Mabel’s unique?

100 percent the people. The style of service you're going to get here you can't get anywhere else. The design, the space, makes you feel at home. Marlar, with the help of her friend Doug, designed all this and it's fantastic. A lot of people say you walk in here and it feels like home. The food is, again, completely unique. You can always get similarities but it is uniquely itself. Ross the bar manager, Ian, and Dan are all very good cocktail bartenders [who] have a lot of knowledge and put together a fantastic drinks list.

Yes. I’ve worked in fine dining and I don't want it to feel stuffy. It's meant to be inclusive, because there's no point in gatekeeping something like this. As soon as you make it feel welcoming and accepting, more people are going to come to experience it and that's the whole purpose; letting Marlar tell her story in a way that enlightens people about Myanmar. But it’s really all just a big team effort.