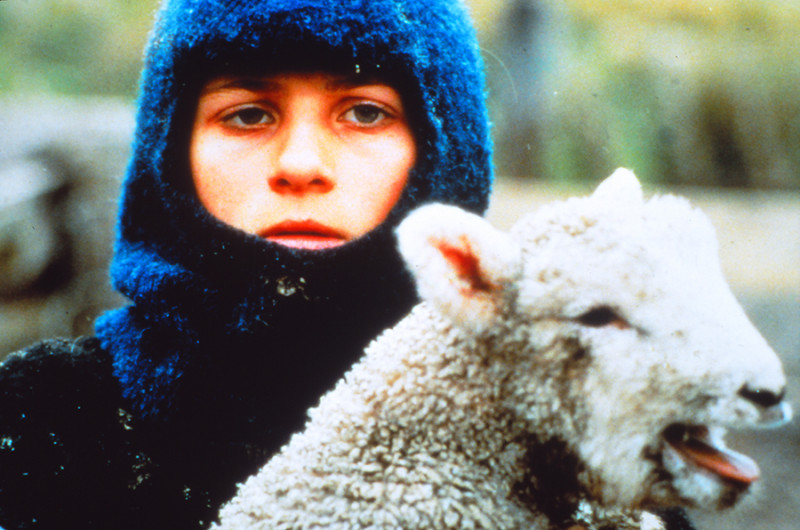 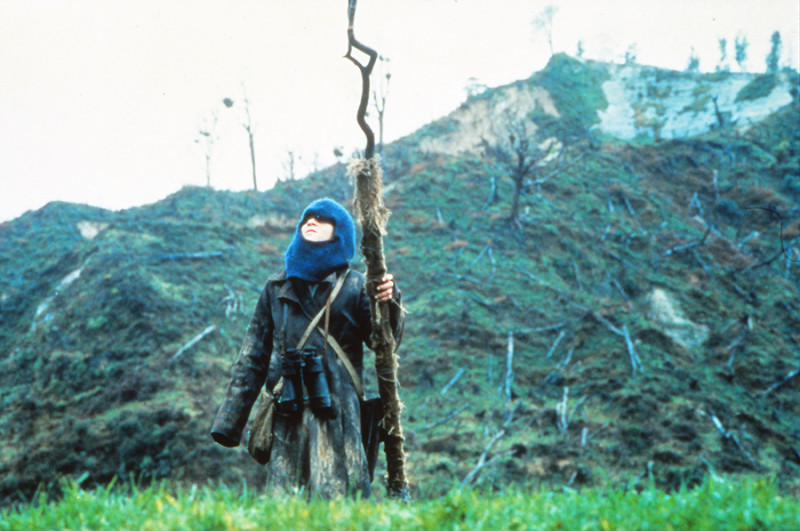 Aotearoa at the movies: Vigil by Sam Hollis

In the early 1980s, many of our filmmakers were vying to put a Kiwi spin on New Hollywood attitudes. But Vincent Ward was cut from a different cloth. Having graduated from the Ilam School of Fine Arts in Christchurch, he emerged from a distinctly visual background. Even his early shorts would sooner be compared to an expressionist painting than any wide-release America had produced in the prior decade. In hindsight, it seems only natural that Vigil, his 1984 feature debut, would be a quiet, methodical masterpiece, as poetic in its framing as it is in its narrative.

Set on a misty farm in northern Taranaki, Vigil stars 12-year-old Fiona Kay as Lisa, more commonly known as Toss. She lives a remote life with her parents and grandfather, until one fateful day, she watches her father fall to his death while trying to save a sheep stuck in a crevasse. Ethan, a local hunter played by Frank Whitten, returns the body and proceeds to make up for her dad’s absence, but to Toss, he is simply an unwelcome intruder.

For Ward, the story was entirely character-driven, with his lead serving as somewhat of a surrogate for himself. Like Toss, he’d grown up on an isolated farm with rough cliffs. Like Toss, he witnessed the casual violence and bloodshed that accompanies farm life. And like Toss, he daydreamed.

“My sisters and brother were away at boarding school, so I was pretty much alone a lot of the time,” Ward says. “My mother wasn’t very happy at that time of her life, so I’d escape the kitchen and the house, I’d go wandering. Both my parents had been soldiers, so I’d dress in Army uniform, the leftovers that my dad had from World War II, and go out with a rifle and imagine a sort of make-believe world in my mind. That sort of imaginative character is what I pictured for Toss.”

Toss has a spiritual connection to the land. Ward was a failed altar boy who perceived a clash between the Catholic understanding of how humans behave and the animal behaviour he observed on the family farm.

“On the one hand, with Catholicism, you’re given a certain order in how the world works… But then on a farm the world is quite different. You observe, through close observation, how animals behave, and we’re animals. You have these two sets of paradigms that are largely in opposition, and I was still trying to put those two together, probably subconsciously, to try to figure out how the hell the world worked. Toss goes through a similar journey.”

Vigil’s moody atmosphere and lyrical storytelling were the result of two contributing factors: Ward’s influences and his close collaboration with director of photography Alun Bollinger. Ward’s viewing preferences skewed European, which shone through in his sensibilities. In a retrospective, Out Takes Film Festival organiser and former New Zealand International Film Festival programmer Richard King mused that it feels like “Tarkovsky transported to Taranaki”. Specifically, Ward points to two Spanish films starring a young Ana Torrent as influences: Carlos Saura’s Cría Cuervos and Víctor Erice’s The Spirit of the Beehive.

“They’re really beautiful, moody, atmospheric movies about that child – that actress as different characters – grappling with trying to understand events around her that were larger than her,” the director says. “Those two films had enormous impact on me… they had an intimacy about them, and you totally got inside that little girl’s mind in both films.”

Bollinger had been behind the camera on Ward’s first shorts A State of Siege and In Spring One Plants Alone and has since become one of New Zealand’s most famed cinematographers. Three years prior to Vigil, he shot Goodbye Pork Pie, his next film was Patu!, and then, in the 90s, his famed collaboration with Sir Peter Jackson began, framing Heavenly Creatures, Forgotten Silver, and The Frighteners before taking a role on the second unit of The Lord of the Rings trilogy. He would work alongside Ward again for 2005’s River Queen. Ward says while Bollinger was supportive of his ideas, “he’d bring his own magic to everything”.

“He works without ego. I frame a lot of things myself, but he brings his own magic to it, particularly with light. It’s not always that you work with somebody who’s open and yet has so much to give.”

Together, Ward and Bollinger made the environment of Vigil come alive. It’s unmistakably New Zealand, but also occupies a fantasy space shrouded in fog and dampness. Dark silhouettes appear surrounded by deafening gusts of wind; grey, green, and all the muddy colours in between dominate; the cliffs and hills surrounding the family’s cottage appear simultaneously contained and never-ending. Finding the environment that would fill the fantastical mould Ward envisioned was a huge challenge. He travelled thousands of kilometres location scouting, trying to spy a U-shaped valley with a lagoon, cliffs, and a hillside on which to site the hunter’s hut.

“I had this cosmology in mind that this little girl would see this hunter living in a hut overlooking their cottage, and she would see him as some sort of mythical presence that would look down on her house, a little bit like the images she was seeing in the old family Bible.”

When he found his dream spot in Taranaki, he and the crew had to fill in the blanks. An old hut was placed on the hill by crane. Several old houses were cobbled together for the cottage, same for the family’s woolshed. At the centre of it all, of course, is Fiona Kay. Her casting was pre-production’s other exhaustive search.

Ward visited schools in Auckland and Wellington over the course of two years, considering hundreds of actresses for Toss. With permission, he’d sit in the back of classrooms and, if anyone caught his attention, hand the teacher a letter inviting them and their parents along to an improvisation workshop.

“I had quite a particular look in mind, and it meant that I got kids that were not film kids. They were not daughters of actresses, they weren’t wealthy kids doing drama,” Ward says. “Fiona very much came from that background – solo mum in Te Atatū, not someone who would ever normally do acting – but was incredibly genuine and raw… You could see right inside what she was thinking.”

The rest of the cast was rounded out by Penelope Stewart as Toss’ mum Elizabeth, Gordon Shields as her dad Justin, Whitten (well known to contemporary audiences for his performance as Ted West on Outrageous Fortune) as the invasive hunter Ethan, and Bill Kerr as her grandpa Birdie. Kerr, who has been a comedian appearing on The Goon Show among many other screen credits, provided some much-needed relief on the set.

“I remember I kept asking him to do a take one day with the tractor chasing after him, and after about four takes he got sick of it and pretended to have a heart attack in the middle of the take. So he fell over and pretended to convulse, and we all just went white with terror. Obviously, I got the point he was making, and I didn’t ask for another take,” Ward laughs.

Vigil became the first New Zealand film to screen in-competition at the Cannes Film Festival. Though the prized Palme d’Or ultimately went to Wim Wenders’ Paris, Texas, the film received a standing ovation. Ward says he felt a bit out of his depth at the prestigious festival, but after years of stress, it was a worthy celebration for him, producer John Maynard, and the cast.

“We never knew whether the film would work or not. It was quite a big gamble because so much of the story is not told through dialogue, and you’re working right up to the last minute, and suddenly you can let your hair down. I mean, I didn’t do anything crazy, but it was quite an amazing experience to come out of that vice of stress that’s led up to it and suddenly everyone’s looking at you – it’s weird! For a day, you’re a star.”

The reception of Vigil and his next feature, 1988’s The Navigator: A Medieval Odyssey, garnered notoriety for Ward. He befriended Terrence Malick, received a note of support from Barbra Streisand, and was invited to meet Steven Spielberg. Though he admits, he was an hour late for their appointment.

“I wasn’t used to LA and I got lost on the motorway, I went the wrong direction. So by the time I met up with [Spielberg] I was probably a gibbering idiot. But he was nice. He took the meeting standing up because he probably thought, ‘Oh, he’s so late I’ll give him two minutes’, but we ended up talking for probably 50 minutes.” While reluctant to namedrop, Ward says, “those were memorable experiences that meant something to me”.

Ward believes he was “spoilt” on his first feature. He was granted creative freedom and scored top-notch collaborators. The biggest lesson he took from the experience was in creating on-set camaraderie, joining hand-in-hand with the actors and crew to form a “little family”.

“If you’ve got the right people behind you, you can make a personal, crafted film. And that’s kind of what that film was, every part of it meticulously made.”

Vigil is available online at NZ Film On Demand.