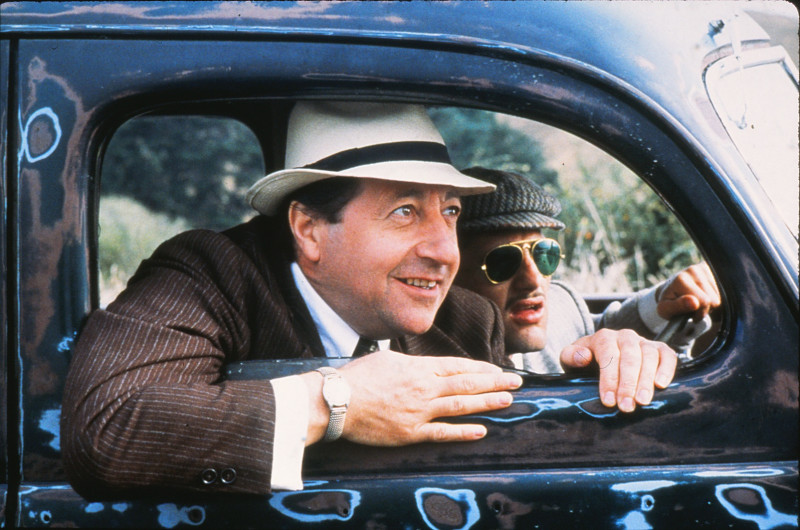 Aotearoa at the movies: Came a Hot Friday by Sam Hollis

In the early 1980s, Ian Mune was having a crack at Hollywood. The Kiwi writer-actor was in Los Angeles helping Roger Donaldson – who directed Mune and his script for 1977’s Sleeping Dogs – pen a sequel to Conan the Barbarian and, later, Donaldson’s fourth feature, The Bounty. He’d recently been introduced to Larry Parr, a savvy young lawyer-turned-producer, who asked, “Ian, if you could make a movie, what movie would you like to make?” On a whim, Mune replied, “Came a Hot Friday”.

Mune had been a fan of author Ronald Hugh Morrieson since the early 60s, around the time he became a founding member of Downstage Theatre in Wellington, but never imagined he’d have the opportunity to direct a feature. Following the success of Goodbye Pork Pie in 1981 (co-written by Mune), there was a yearning for Kiwi filmmakers to ditch the gloom that had saturated our cinemas post-Sleeping Dogs and embrace local humour. Once he’d fulfilled his duties on The Bounty, Mune took up the challenge.

“I hopped on a plane, came back to New Zealand, and we got started on Hot Friday,” Mune says, “and lo and behold, suddenly after this spur of the moment decision, we were lining up for the first day’s shoot.”

Set in 1949, Came a Hot Friday follows conman Wes Pennington (Peter Bland) and his right-hand man Cyril Kidman (Phillip Gordon) as they arrive in a rural Kiwi town looking to run a horse-racing scam. Trouble and hilarity ensues as they are introduced to the town’s many quirky characters, including the Tainuia Kid, a delusional Māori local who believes himself to be a Mexican bandit ripped straight from a spaghetti western, portrayed by Billy T. James.

Finding the right tone for the film was a challenge. The process began with Mune’s screenwriter of choice, Dean Parker, working up a draft based on Morrieson’s novel.

“About a month before we went down and started pre-production in Eltham, we still didn’t have the script where it needed to be. I’d gotten hold of Dean’s draft and done a version over the top of that, and both Dean and Larry said, ‘No, Ian’. I looked at it again, and it was just a very dark, horrible story.”

Parker’s version had retained Morrieson’s humour, and after a writing session with him and composer Stephen McCurdy, they finally had a script that satisfied all parties. Next, Mune needed funny people. For the slimy Wes, he turned to Peter Bland, an actor he knew as the co-founder of Downstage.

“I knew he led with his nose. Physically, it’s a very funny nose. So I thought he and Phil would go together as a pair really well, and they did,” Mune says.

With Wes and Cyril cast, the creative team got to work mining laughs, still trying to zero in on the style of humour they wanted to capture.

“Actors have a lot of time to fill waiting for setups. Peter and Phil were clowning around, and Peter was doing his Groucho Marx walk – you know, bent knees, tapping an imaginary cigar. I said, ‘Do that when you walk up to the window’. We were doing a tracking shot going backwards with Peter coming towards us as Groucho Marx, and at the end of the first take, I heard a voice behind me say, ‘My god, if the rest of film’s going to be like that, we’re in trouble’. As soon as I heard that, I thought, ‘Ah, we’re onto it’. That pretty much set the style.”

The ensemble was rounded out by quintessential Kiwi actors such as Michael Lawrence, Marshall Napier, and Erna Larsen, with the technical crew including names like director Lee Tamahori (Once Were Warriors), who served as first assistant director, and cinematographer Alun Bollinger, who later worked alongside Sir Peter Jackson and Vincent Ward. The film’s most extravagant role would be filled by Billy T. James, who had been making a name for himself on TV. The ARRIBA-shouting, cap gun-toting Tainuia Kid challenged even him, as the concept of “straight acting” was new to the master comedian.

“He said, ‘So, Ian, this is straight acting, I don’t know about straight acting. This guy’s the funny guy, right?’ I said, ‘No, no, no. The one thing he’s not is funny. This guy is the most serious person in the whole movie. He absolutely believes that he is a Mexican bandit.’”

The majority of the film was shot in and around Eltham, South Taranaki. The furthest afield the production got was the Waverley Racecourse, the setting for the film’s opening sequence. While the town came equipped with an old-timey aesthetic that evoked late-40s New Zealand, some adjustments had to be made to achieve a convincing period look. One key location was a woolshed, which was pieced together from three deconstructed sheds found locally before the crew “had the great pleasure of blowing it up”. That climactic moment drew a crowd of around 200 people, as word of the stunt spread from Eltham to Whanganui.

“There was a hill overlooking the woolshed a safe distance back from it, so we sat all the people on this hill and they all had a wonderful party. In fact, it was quite dangerous to go up on the hill because there was so much dope being smoked up there,” he laughs.

“An Aussie joker was doing all the explosions, and he came up with this great idea of getting big 44-gallon drums, filling them up with petrol, and putting a charge underneath them. When it went off, these drums led the charge up into the sky, in flames. So you didn’t look at it and think, ‘Oh, there’s one of the drums’, you just thought, ‘Holy f**k!’ It was a mighty explosion.”

The film was released in 1985 and immediately connected with Kiwi audiences. It found further success at the New Zealand Film and TV Awards the following year, winning seven awards including Mune for Best Director and Best Screenplay Adaption with Parker; Bland for Best Performance, Male in a Leading Role; James for Best Performance, Male in Supporting Role; and Parr for Best Film. Nowadays, Mune says, “I’m not sure what its legacy is”.

“The thing about it was, I wanted to show that New Zealand actors could do comedy, that we didn’t have to do dark films, because we were doing quite a lot of them.”

Came a Hot Friday was digitally remastered for a DVD release in 2011 and is available online at NZ Film On Demand. It stands apart as a uniquely flamboyant physical comedy in New Zealand’s cinematic landscape, one that captured our humour in a way it hadn’t quite been captured before.