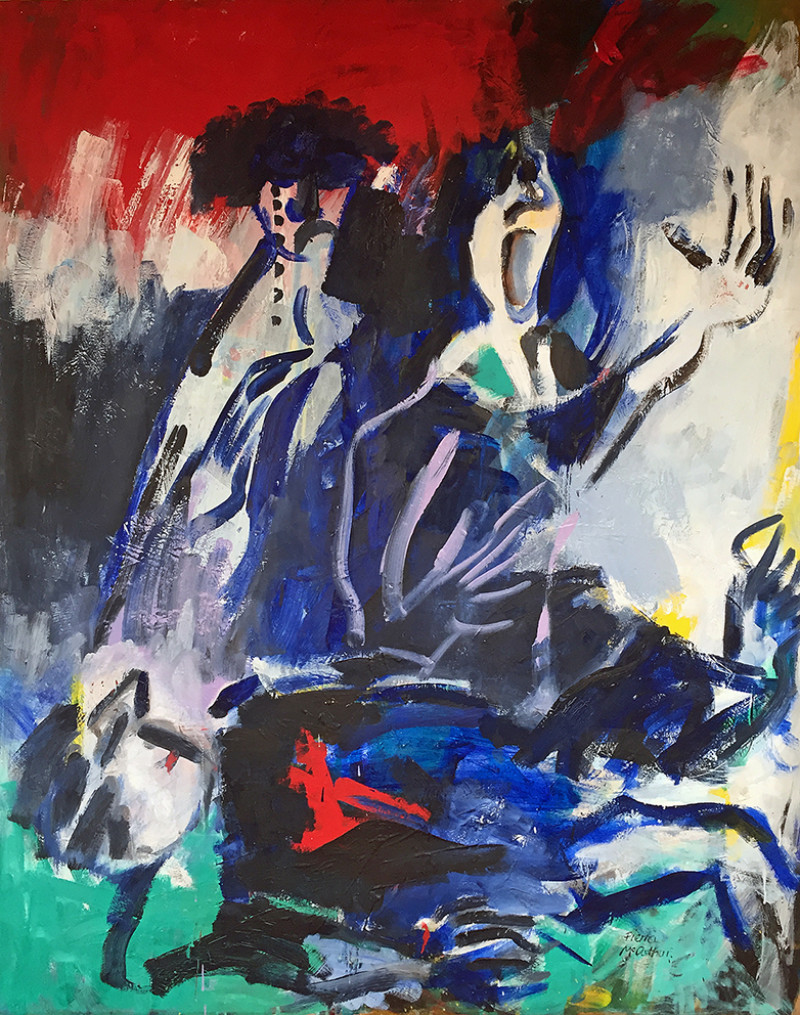 The horror of finding Luigi dead by Piera McArthur.

The Death and Resurrection of Luigi Spinelli was a landmark series for Piera McArthur ONZM. The 15 paintings, which she began in 1980, tell the Italian legend of a man killed by a bull and the sorrow and enlightenment that followed for his widow.

The entire series, including several previously unexhibited artworks, will be shared alongside a selection of McArthur’s other paintings in The Death and Resurrection of Luigi Spinelli (and other stories…).

The series, McArthur explains, is about destiny, wrapped in the spirituality often associated with Italy.

“They tell the story of a man who was tossed by a bull, and it’s very intricately bound up with my half-Italian background and all sorts of things to do with life in Italy. The dramas of life, really.”

“It’s really saying that you can’t help destiny. It starts off with Luigi standing there with il toro assassino, the murderous bull, and he’s saying, ‘oh, destiny, why didn’t you leave us alone?’”

Through McArthur’s colourful and emotive illustrations, we observe the grief of Luigi’s widow, Clara. Initially beset by horror and loss, her path eventually leads them to reunite in heaven.

“Her great longing is to be reunited with Luigi. It’s about her search, and it ends up with her in a sort of paradise.”

The ‘other stories’ mentioned in the exhibition’s title represent times of great resonance in the 91-year-old artist’s life, such as Anzac Day at Maraekakaho, which expresses her connection to parades and war ceremonies.

The Death and Resurrection of Luigi Spinelli (and other stories…) will run at the Exhibitions Gallery of Fine Art until the 24th of October.